For Henry and Patricia

Will Campbell is the author of "Brother To A Dragonfly", which won the National Book Award in 1978. 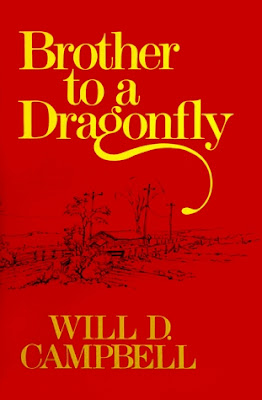 He was the inspiration for Reverend Will B. Dunn in the Kudzu comic strip.

He earned a Doctorate from the Yale Divinity School.

Any of those three things would be enough to earn some serious respect.  Campbell was also a civil rights worker in the Deep South during the 60's.  He spoke out against the Viet Nam war when almost everyone around him disagreed.  This was back in the day when "liberals" were against any war, not just Republican wars.  They didn't trust the government, no matter which team was running it.

Heck of a guy, that Will Campbell.

My friends Henry and Patricia are getting married this weekend in New Orleans.  I was planning to be there.  They even asked me to get ordained so I could perform the marriage ceremony.  (I got 'er done through the Universal Life Church.)  Because of some personal complications, I'm going to have to think about Henry and Patricia from afar during their wedding.

Had I been able to be there, my part of the service would've been along these lines, boiled down and condensed considerably.....

Here's Will Campbell, writing about marriage in "Brother To A Dragonfly".  The italics are mine:


If there is a body, a community, which is truly Church, or even claims to be Church, why should it be the executor of Caesar’s documents? What is a marriage license but a legal contract? And what does any legal contract promise and offer except the right to sue one another at another time and place before another of Caesar’s agents? Perhaps such contracts are socially necessary but what does that have to do with us? And even if we are not Church now but want to become Church, free from the demands and legality of Caesar, why not start by returning all of his documents and refusing ever to do it again? “No, Mr. Caesar, that is not our understanding of what marriage is all about. If you must protect yourself and your citizenry in this fashion you may continue to do so. But not with our help and blessing. Let the faithful come before the altar of the One we must serve rather than, and before, you. And acting on His, and only His, authority we will pronounce them man and woman, husband and wife.”

Too Libertarian?  Probably.  Did Henry and Patricia know that's what they'd get if they asked me to do their wedding?  Probably.

Back to Will Campbell:


I was never again to say, “By the authority vested in me by the State of Tennessee.” If my authority as a priest comes from the State, then I have no authority at all. From that time on, I began all weddings by saying, “Render unto Caesar the things that are Caesar’s. If you have a license, we will sign it at this time.” And then saying to the couple, “Now what we have just done is to endow you with a legal contract. It has nothing to do with Christian marriage. It is nothing more than a contract between you and this state which gives you the right to sue one another if you should ever desire to do so.” And the document is tossed casually, and sometimes contemptuously aside. “Now, the passage which begins ‘Render unto Caesar the things that are Caesar’s continues. ‘And render unto God the things that are God’s.’ And the wedding begins at this point.”

Lord have mercy, I would have enjoyed contemptuously casting that document aside.  Especially during Jazzfest in New Orleans.  Oh well.  Back to Will Campbell:


Maybe one day I will yet follow my conscience and refuse to sign that document at all, ask the couple to have a Justice of the Peace sign the Contract of Caesar. And on a number of occasions there have been no such documents. And by the authority vested in me by Almighty God I have pronounced them man and woman, husband and wife. And I defy Caesar to question that they are married. But those without the document are required to spend an extended amount of time with me and with one another in making sure they are ready for such radical trust and commitment. For they do not have the protection that the legal contract would afford them. They cannot sue one another. They have only themselves, the community if there be one, and the source of the authority which so joins them. Those who have come with no license have not come flaunting liberation but bearing witness to servanthood. They are not products of a new morality but an anachronism of an old morality, a testimony to “Jesus Christ is Lord. Hallelujah!” (from Brother to a Dragonfly, 213-214)

You get the idea.

Henry Farrish, my friend since the 4th grade, and Patricia Starnes, my friend since freakin' kindertgarten, would've come away from the ceremony knowing that they were by-God married.  I would've tied that knot and yanked on it in front of the entire Ninth Ward to make sure it was going to hold.

Henry and Patricia have spent 40 to 45 years with me, and I am assured that they are ready for this type of radical trust and commitment.

They don't need the protection of a legal contract.  Anyone who hangs out with them needs diabetes medication to keep from going into insulin shock.

They will not sue each other.

They have something that so many people do not have.

I do so wish them all the best.
Posted by The Whited Sepulchre at 8:17 AM

"If you are single and will one day get married, you might want to consider what business it is of the state. And if, like all good libertarians, you conclude ‘none’, then you might want to weigh the value of a state marriage certificate against the indignity of submitting an application to our overlords. And to aid your contemplation of this matter, who better to turn to than that Wazir of Wiener Dogs, The Whited Sepulchre? Attend him as he quotes from the wisdom of Will Campbell..."