What If They Had A Coup, And Nobody Came?

Someeone named Lee Stranahan recently wrote this essay for The Huffington Post.
The Italics are Mr. Stranahan's text. Everything else is an ill-advised rant on my part.

With all the party and media babble about who is better equipped to take over the Republican party in the wake of the bloodbath of the '08 election, it's impressive how deeply the pundits have been able to repress the memory of the Ron Paul campaign.


Ah, yes. Ron Paul. Dr. Ron Paul. The guy who got a lot of people excited, and raised a lot of money, but couldn't turn any of that small government excitement into Republican Party delegates.

After all, compare the Ron Paul 'Revolution' campaign with Barack Obama's now acknowledged electoral genius. That stuff Republicans are now realizing they have to do in the future? Paul did it months ago. Excited new voters beyond the base? Check. Raised massive amounts of money from small donations online? Ditto. Legions of creative people generating their own campaign content on YouTube and beyond? Did it. Young voters? Had those.

Had a coherent governing philosophy, instead of acting like a human weather vane? Check. Predicted our current financial crisis? Check. Isn't afraid to sound the alarm about the Fed printing money as if it doesn't have to be "backed" by anything, which, come to think of it, it isn't? Check. Wrote the best book I read this year, "Revolution: A Manifesto"? Check.

The biggest problem for Ron Paul and his supporters is the turd-in-the-punchbowl way they were treated by the Republicans. Remember Rudy's snide confusion over the idea that the United State's foreign policy may have somehow have been a factor in why the U.S. was attacked on 9/11? Recall the debate shunning?

Yes, we recall the debate shunning. And the day after that debate, Ron Paul started raking in money with both hands and a leaf-blower.

But look how things have changed. McCain's psuedo-maverick-ism tore the Republicans a gaping new one after they collectively rejected Ron Paul; the only candidate with ideas for real, actual change...such as ending the Iraq War.


Or harnessing the Fed, or ending all of our mindless subsidies and quotas and set-asides, and increasing both economic and personal freedom.

The beauty of the current GOP anarchy is that it may present the perfect chance for the anarachists to take over the establishment. Or the anarcho-capitalists or limited government small L libertarians and or whatever y'all can agree on. (And good luck on that -- agreement isn't what libertarians do well.) The party is ripe for the taking. Ripe, I say!


Yessir, it's ripe for the taking. But I don't think the small L (and especially the big L) Libertarians want any part of it. You know why most Libertarians don't want any part of the Republican party? BECAUSE IT HAS REPUBLICANS POLITICIANS IN IT ! ! ! BIG GOVERNMENT, BIG SPENDING, WORSE THAN DEMOCRATS, PRAYER IN THE SCHOOLS DEMOGOGUING, MILITARY-INDUSTRIAL COMPLEX LOVING, FARMER SUBSIDIZING, NATION BUILDING, TAX AND SPENDING, BUDGET BUSTING, HOMOPHOBIC REPUBLICAN POLITICIANS. (But other than that, I'm sure it's a fine organization....) 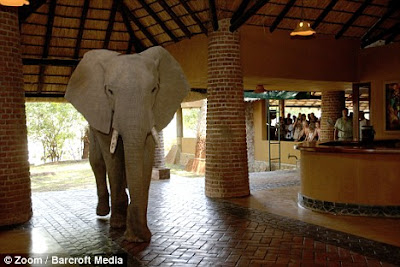 My mother sent me these pictures this morning. They're pictures of what happens if you build a hotel in the middle of an elephant trail. The elephants are accustomed to walking there. After all, it was their trail long before the hotel went up, and elephants have no concept of real estate transfers, the barter system, or property rights. Therefore, the elephants routinely stick to their established paths. They're going to do what they've always done, regardless of their new surroundings. 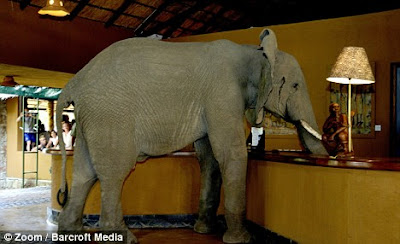 It doesn't take much imagination to see the metaphor here, does it?

It's weeks past the election. Everyone should have sobered up by now. The fact that there is a significant chunk of Republicans that are still crushing on Sarah Palin shows that it's time show the same mercy for the Grand Old Party that The Chief showed to Jack Nicholson in One Flew Over The Cuckoo's Nest -- any sense of rational thought is gone, so pull out the pillow and start smothering until the kicking stops.

Now here's a tougher question. Do you want the Republican Party?

Let's think about it a while longer.

It's got high name recognition and if the two logo choices are the elephant or the donkey, I think the elephant wins. Sure, you don't want most of the people left behind after the Obama rapture devastated Karl Rove's dream of a Permanent Republican Majority and sent anyone with a bow tie, an IQ of over 100 and a dog earned copy of Atlas Shrugged floating off to conservative Valhalla.

If you've got an IQ of over 100 and a dog-eared copy of Atlas Shrugged, you probably already abandoned the Elephant Party several years ago, and left it in the hands of the anti-gay/lesbian marriage people, the anti-abortion people, and the anti-gay adoption people.

(Lee Stranahan just said it a lot better than I did above.)

The appeal of Ron Paul was his ideas, not his lovable ole' funeral director looks. So it's time for someone to grab those ideas, grab the organizational skill of herding a bunch of individualists....

Individualists? Individualists? The outfit that has voted to Socialize The Banks, Bailout Wall Street, and that's about to Bailout The Big 3? You call those people invidualists?

....and grab control of the damn Republican party right now... before I have to listen to Mike Huckabee's jokes, Mitt Romney's dumb advice or Sarah Palin's effin' voice for the next four years. 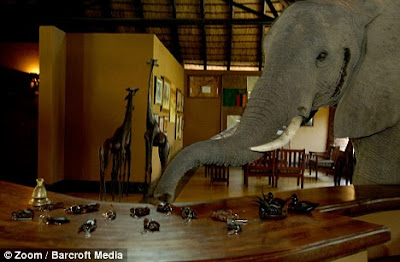 Posted by The Whited Sepulchre at 10:17 PM

Elephant to front desk clerk:
Yes, I'm here to check out of the Republican Party... Uh, right, it's an early checkout."

Actually, I just had dinner with a nice group of Republicans (notice I didn't say GOPers?) and they were quite nice, well read, ate with utensils and had opposable thumbs. I think these fellas may shake things up inside the now-GOP and turn them back into the Republicans.

However, for now, I'm happy being on the outside shooting my little pea shooter at the hull of that aircraft carrier. They may take over the wheelhouse soon and then I won't have a problem coming on board. But now - I'll help them if I can, but I'm having too much fun with my LP companions flying the Jolly Roger right now!

Kinky Friedman shook my hand once and called me 'a great American'. I'd mentioned I had bought his salsa.

Lee,
Congratulations on meeting the Kinkster.
Hope you enjoyed my commentary.
You have waaaaay to much sense to be a Republican. Please take a look at the Libertarians. Come on in, the water's fine.