For about the last two years, I have been blessed/cursed with a commenter who calls himself Cedric Katesby.  He lives somewhere in South Korea.
Go here for a sample of Cedric in action.  Cedric believes that we are causing the earth to get warmer.  I don't.  I think earth's temperature is on a natural cycle.  I believe that there was a Medieval Warm Period.  I believe that it was once warm enough to grow potatoes in Greenland.  I believe that Al Gore's "Hockey Stick" is more like a little pruning hook.
Cedric believes otherwise.  We have argued with each other for about two years.

Then East Anglia University's Climate Research Unit's emails were hacked, revealing efforts to "hide the decline" of warming.  Much nastiness was uncovered about the peer-review process.
Then the Copenhagen Climate Change conference was a dud.
I stopped hearing from Cedric.  Dr. Ralph, among others, wondered where Cedric went off to, and my theory was that he might have lost his funding.  I didn't think I'd ever hear from Cedric again.
A few weeks ago, I got an email.  Cedric wanted to send me some books.  I gave him my work address, and didn't think much more about it.

The other day, I got two large boxes of books in the mail from Barnes & Noble, compliments of Mr. Katesby in South Korea.  Most of them are about Climate Change, some are about skepticism in general (Cedric still can't believe that I'm not a religious fundamentalist) and some are about other issues where we've disagreed.  A few of them he just thought I would like !
It's the most extreme example of true dedication to a cause that I've ever seen.  I'm guesstimating that Cedric spent more than $200 on these books. 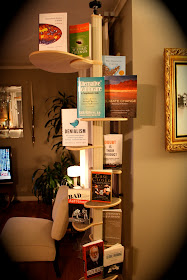 Included are:
1) Atmospheric Science at NASA: A History
2) Climate Change: Picturing The Science
3) Doubt Is Their Product: How Industry's Assault on Science Threatens Your Health
4) Alternative Healthcare: A Comprehensive Guide
5) Bad Astronomy: Misconceptions And Misuses Reavealed
6) Creationisms Trojan Horse: The Wedge Of Intelligent Design
7) Denialism: How Irrational Thinking Hinders Scientific Progress, Harms The Planet, and Threatens Our Lives.
8) The Cigarette Century: The Rise, Fall, and Deadly Persistence of the Product That Defined America
9) The Demon-Haunted World: Science as a Candle in the Dark
10) The Faith Healers
11) Why People Believe Weird Things: Pseudoscience, Superstition, and Other Confusions of Our Time
12) Case Closed: Lee Harvey Oswald and the Assasination of JFK
13) The Discovery Of Global Warming
A couple of things about these.  "The Demon-Haunted World" by Carl Sagan is one of my favorites, and I read it for the third time last year.  I've already been loaned to a friend.  "Case Closed" by Posner is one of the few best-selling books on the Kennedy assasination to more or less agrees with the Warren Commission Report.  (Mrs. Sepulchre is a Kennedy assasination expert, and she takes issue with many of Mr. Posner's findings.)  "The Faith Healers", by James Randi, is a Prometheus Press classic that I read soon after it was released (late 1980's?) but I look forward to revisiting it.
It's going to take me years to read all of this stuff.  I'll probably start with the NASA title, then go to "The Discovery Of Global Warming" since those are the two most intimidating volumes.
Cedric, if you ever find yourself in Fort Worth, TX, I owe you one.  The food and drinks are on me.
Next topic.....Think of the person you would most like to convert to your point of view on your favorite hot-button issue.  For instance, my passion right now is freedom and liberty.
If I were to mail 13 books to "convert" someone to Libertarianism, I would probably select:
1) Free To Choose, by Milton Friedman
2) Modern Times, by Paul Johnson
3) Mao's Last Revolution, by Roderick MacFarquhar
4) Libertarianism: A Primer, by David Boaz
5) Radicals For Capitalism: by Brian Doherty
6) Eat The Rich, Parliament Of Whores, and Holidays In Hell, by P.J. O'Rourke
7) Hamilton's Curse, by Thomas J. DiLorenzo
8) What It Means To Be A Libertarian, by Charles Murray
9) Basic Economics, by Thomas Sowell
10) Economics In One Lesson, by Henry Hazlitt
11) I, Pencil, by Leonard Read
12) The Revolution, by Ron Paul
13) The Price Of Everything, by Russ Roberts
Any other suggestions?
Cedric, thanks again for the books.  We really have missed you !
Photographs of the books came from the Mac/Photoshop/Photography Princess.
The Whited Sepulchre at 1:51 AM
Share