Fire in California, Water in Lousiana, Schwarzenegger, and Blanco

Laura's Miscellaneous Musings has a post making unfavorable comparisons between the disaster control effort in New Orleans with the current disaster control effort in California. She also makes some unfavorable comparisons to the situation that developed in the Super Dome with the current one at Qualcomm Stadium. You'll have to dig around the links (hit the one for wringing his hands - it's worth it) to find unfavorable comparisons between Louisiana's Governor Blanco and Schwarzenegger.
These are totally different disasters, but the contrast is stark.
Anyone digging around in there will also make unfavorable conclusions between Laura's site and this one. Lordy, this lady is good at what she does. I disagree with some of her positions, but everything she writes is linked to almost every possible source that's out there. It's a fun site to click around in.
The picture below is from the L.A. Times. The first comments currently posted below their article link the tragedy to 1) Global Warming, and 2) Greedy developers.
Yeah. Right. 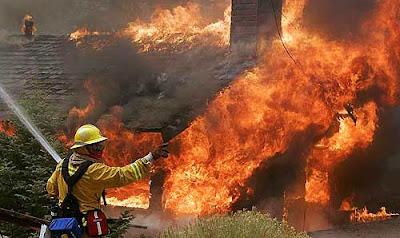 Posted by The Whited Sepulchre at 8:25 PM

I appreciate your kind comments very much! It's gratifying to know others enjoy my efforts and find worthwhile reads via my site.