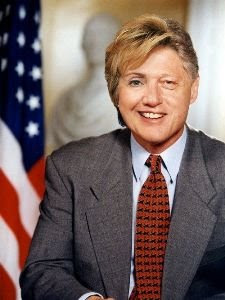 Bill Clinton was unable to carry Illinois on Super Tuesday, despite selecting a running mate from a Chicago Suburb.
Former President Clinton was able to carry his own home state of Arkansas.

There was a similar embarrasment when Al Gore couldn't carry his own home state of Tennessee in the 2000 elections.

Bill Clinton should now consider a different person for the bottom of the national ticket. Someone with a greater "electability" quotient than Hillary Clinton. Perhaps a popular Governor or Senator from one of the large swing states like Florida or Ohio. Or even Illinois Senator Barack Obama.
Posted by The Whited Sepulchre at 9:35 PM