Needed: A vetter for the vetters

There are several ways to reduce government waste. The best method, of course, is the one least discussed: don't give the government any of your money.

That's the spirit I've tried to honor with "The Whitey Award", a small trophy given for eliminating government waste by ignoring the tax code. Click on "The Whiteys" at the bottom of this post for a listing of all the nominees.

Now people are trying too hard to draw attention to themselves, and I might have to retire the trophy. This isn't supposed to be the Special Olympics. Everyone can't be a winner. It's not an honor if the entire democratic party gets one.

The awards may have gotten the attention of The White House, since Obama's cabinet walls were starting to look like the Trophy Room at Notre Dame. Here's Politico:

The White House has dramatically tightened its vetting process following embarrassing revelations of past tax problems by several nominees, according to two officials familiar with the process...."A narrative was building, and the president asked us to be more vigilant in the vetting process," said a source involved in the vetting.

Dang right, a narrative was building. And the narrative stated that The Obamessiah's disciples weren't tithing, despite advocating more spending by The Church Of Big Government. It was becoming an embarrasment.

Now, amid a series of embarrassing personnel stumbles that have bogged down the administration's attempt to move swiftly to its legislative agenda, Craig is assuming control of the vetting process for nominees. That portfolio includes helping shepherd the next choice for secretary of health and human services, who will replace former senator Thomas A. Daschle (D-S.D.) after his decision to step aside because of tax problems, and making sure the nomination of Rep. Hilda L. Solis (D-Calif.) as labor secretary does not fall victim to the same fate after tax liens against her husband's business were revealed yesterday.

Then click here to see if Derry Noyes, or anyone else, has applied to run a business from that address. (It's a private residence.)

Click here to read the Wikipedia article on Tax Evasion.

Congratulations, Greg Craig ! You are in charge of making sure no one else in the Obama administration wins a Whitey ! And now you're a winner ! You sneaky son-of-a-gun. 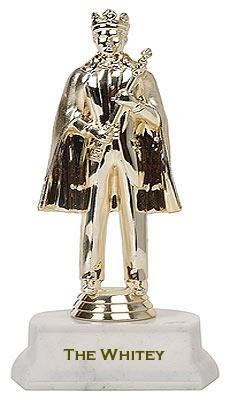 Who is going to vett the vetters?

Posted by The Whited Sepulchre at 8:53 PM

Shouldn't the only "vetting" required be what was done to my cat a few years back?