The New York Times Is Decadent And Depraved

A friend of mine sent me this chart from the February 27 New York Times. It shows the gap between federal spending and federal receipts.
At first glance, the projected deficit doesn't look that bad, does it? We've been through worse, haven't we? 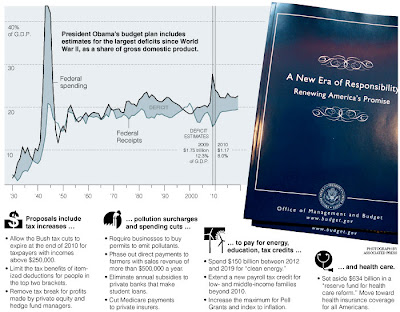 But after I looked at it for a few seconds longer, I saw what was wrong. Where is the Reagan revenue boom (and the Clinton/NAFTA) echo?
The chart shows the federal receipts, spending, and deficit as a percentage of gross domestic product. Hit the link above if you can't read the fine print.

We mustn't scare the New Yorkers, but....there are more honest ways to present that information, especially if you are going to display it beside a document entitled "A New Era Of Responsibility".

Here's what those numbers really look like in millions of dollars, instead of as a percentage of another number. Can you imagine the NYT printing this chart alongside the "New Era Of Responsibility" payoff pamphlet ?

The first question you should ask is "What the hell is happening to the value of the dollar?" (Answer: They're printing them as they go.)

The second question is "Why did the NYT go out of their way to make the latest giveaway/bailout numbers look less threatening?" (Answer: The hope and change thing.)

The third question is "What is the total of all this deficit spending?"
(Answer: Here's the national debt as of last year. I don't have an update for all the latest ladles of slop and neither does anyone else, but you get the idea.)

And people wonder why newspaper readership is declining.

Posted by The Whited Sepulchre at 4:44 AM

Allen,
I love the USA but I can't afford to go there for a bit. If you think the dollar is down the khazi you should try buying electronica from the East with pounds. I have to. It is a surreal experience.

Jim Rogers is a freaking oracle... he beats Buffet to hell since Rogers has moved to Southeast Asia and has begun farming... The 'Oracle of Omaha' is still in Omaha and owns hunks of banks.

I believe the underlying problem to EVERYTHING (which is being pooh poohed by Keynesians in the media today) - is none other than our fiat monetary system backed by debt issued from the private banking consortium known as the Federal Reserve...

And yet they're still aghast and nonplussed when markets crash and business fail when they turn the money printing machines to full speed ahead.

Weekends to peopleig2tmean that they can have a two-day wowgold4europe good rest. For example， people gameusdcan go out to enjoy themselves or get meinwowgoldtogether with relatives and friends to talk with each storeingameother or watch interesting video tapes with the speebiewhole family.
Everyone spends agamegoldweekends in his ownmmoflyway. Within two days,some people can relax themselves by listening to music， reading novels，or watchingogeworld films. Others perhaps are more active by playing basketball，wimming ormmorpgvipdancing. Different people have different gamesavorrelaxations.
I often spend weekends withoggsalemy family or my friends. Sometimes my parents take me on a visit to their old friends. Sometimesgamersell I go to the library to study or borrow some books tommovirtexgain much knowledge. I also go to see various exhibition to broadenrpg tradermy vision. An excursion to seashore or mountain resorts is my favorite way of spending weekends. Weekends are always enjoyable for me.
igxe swagvaultoforu wowgold-usaignmax wowgoldlivebrogame thsaleGoldRockUbrogameswagvaultgoldsoonoforuigxethsale