The Burning Hell, Part One

It's Sunday, so that means it's time to review the cinematic efforts of New Albany, Mississippi's Reverend Estus Pirkle. Last week's offering was well-received. It was a short film called "Does This Excite You?", which gave us a view of heaven from The Deep South/Total Immersion States.

I first saw the next Pirkle epic, The Burning Hell, during a Sunday night church service about 35 years ago. Our Mississippi church advertised it for weeks before screening it. 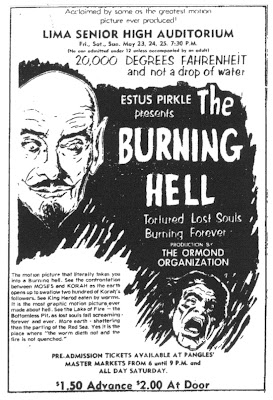 This thing scared the crap out of me.
To understand why, you have to understand that Hell was, and still is, a very real concept for a lot of people. It's not just a metaphor, and it's not merely a symbol for a life removed from God.
It's the place reserved for everyone who doesn't accept Jesus Christ as the sacrifice for their sins.
After a few years, you start to wonder what kind of Being would create things with an inclination towards disobedience so they could be tortured in fire forever. Click here for a rant on that topic. (Sorry for the digression, but don't disagree with me in the comment field unless you've read that link.)

Since a Pirkle film of this length is almost like too much candy, I'll be presenting this in eight parts over the next few weeks. Unfortunately, the first section is kinda like making that first defective pancake. It includes the preliminary throat-clearing and scene setting to introduce all the characters (Moses, Dathan, Mississippi preachers, etc.). If you find my commentary helpful, it's below the YouTube clip.

:05 - You might be the most devout Baptist that ever dunked a drunkard, but if you can see that "powered by" text underneath the satellite and not laugh, then you're taking this waaaay too seriously.

1:40 - Estus Pirkle appears for the first time, but his voice doesn't appear for another 10 seconds. The video and sound are out of sequence on this clip. Not that it matters.

3:15 - Three of Israel's most powerful leaders, dark semitic men of the desert, are portrayed by what look like Alabama deacons.

4:30 - You've heard that same accent in a lot of other movies, usually explaining to Yankee meddlers why we Southerners don't take well to no race-mixin'.

4:40 - I think the actors were told to look terrified, but most of the facial expressions are asking the eternal question "Who Farted?"

And the clip ends just when we were getting to the good part.

If anyone thinks I'm beating a dead horse here, this is from the IMDB comments on "The Burning Hell". Someone calling herself Charlottes Web 1952 writes:

I have watched this movie several times and I am very impressed with the way it was made. It really gives a person an idea of what hell will be like, although I know hell will be much worse than anyone can imagine. Mr. Pirkle has captured a small portion of what hell will be like. I know when I watch it that I want to do the will of God and I know in my heart that Jesus did die on that tree so that I wouldn't have to go to hell. This movie was made in the seventies I believe, and as far as the actors and actresses were concerned, I believe they did a wonderful job with their parts. I noticed someone was talking about the fake beards but most movies that someone has to have a beard is almost always fake. I can say I really enjoyed watching the movie and I want to be a better person by watching it. God bless.

Posted by The Whited Sepulchre at 10:31 PM

The wife and I were watching Rev. Estus Perckle's film on Hell... and I promise... I told her after Hippie #2 rebuked the good rev's offer to listen to his Hellfire and brimstone sermon: "I'm predicting a motorcycle accident in his future" - WELL before they even established him as a motorcycle rider!!

Does that count as prophesy?

I couldn't bring myself to actually watch the entire silliness, so I just click-forwarded to the points where you made your interjections - and it made me laugh real good, thanks! 1952 sounds like she's the real deal - and will continue to send her extra $5 a week disposable income to the Rev to keep his third limo's gastank filled up (much thanks, and extra browny points at the pearly gate fer ya). TLG, very funny too - indeed a soothsayer if ever there was one! Cheers, Tom

Thanks for ruining the movie for everybody else. I can't believe you did that.
Do I sneak into your den when you're watching TV on Saturday mornings and tell you how Scooby-Doo is going to end ???

God bless the two of ya - now it's time to summon John Edwards and find out where you end up on the other side ;-0

UPLOADER said...
This comment has been removed by a blog administrator.
May 26, 2009