Barack Obama, the leader of the U.S. forces killing people in Iraq and Afghanistan for the last 261 days, has won the Nobel Peace Prize. 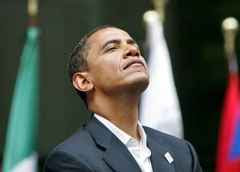 I read something about it around 4:00 this morning, but assumed it was a send-up by The Onion or Iowahawk.


Lord have mercy, it was just a few weeks ago that The Teleprompter Jesus ordered a dozen Bunker-Busting Bombs for a potential attack on Iran. (Bunker-Busters are the most devastating weapons available without going nuclear.) Here's The Debka File:


All this urgency indicates that the Obama administration has been preparing military muscle to back up the international condemnation of Iran’s concealed nuclear bomb program, its sanctions threat and his willingness to join the negotiations with Iran opening on Oct. 1 in Geneva. Tehran may have to take into account a possible one-time surgical strike against its underground enrichment facility as a warning shot should its defiance continue. In particular, the world powers this week demanded that Iran open up all its nuclear facilities and programs to full and immediate international inspection. Failure to do so could bring forth further US military action.


I heard the folks on NPR fumbling around this morning, trying to explain the Nobel committee's decision. Even that gang of White House Sock Puppets were bewildered. They decided that it was probably awarded for Obama's desire for "Multilateral Approaches" to world conflicts. Note the dark type in the article above. I wonder if Iran is worried about France building up Bunker-Buster stockpiles.....


Everyone knew Obama would get this award, but I figured they would have the decency to wait until he was out of office, the way they did it with Jimmy Carter or The Goracle Of Music City and any other Democrats that I may have overlooked.


Unbelievable. They've given the world's highest honor to a marketing campaign. He's doing everything that Bush did - Gitmo, Two Wars, Wiretaps, etc etc etc - but he's so much nicer about it ! ! And he's willing to get France involved !


Whether our involvement in Iraq and Afghanistan is just or unjust, our President is the military leader in both wars. He's ordering people to kill other people. If Barack Obama has any sense of shame, he will thank the committee for their consideration and return the prize.


What a freakin' farce.
Posted by The Whited Sepulchre at 6:29 AM

I can't believe how much ignorance is in this article.

Yeah, it was an astonishingly ignorant decision.

A political decision. That's why it was ignorant.
And considering the The One was nominated 1 Feb, only 11 days after taking the oath of office.