Here's a video from The Center For Freedom And Prosperity about the hidden costs, the opportunity costs, and the obvious right-out-there-in-your-face costs of the American tax system:

Here's an example of the Hong Kong tax system: 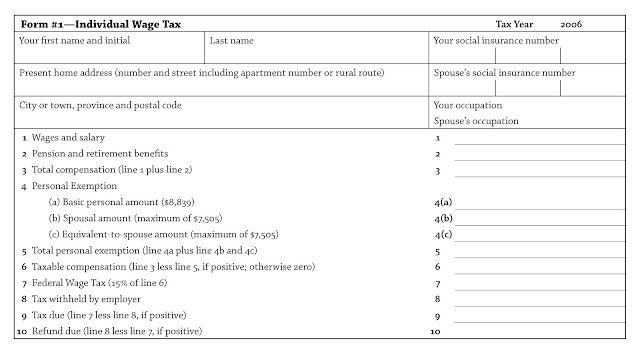 It's a freakin' postcard.
In the Hong Kong system, you don't get deductions for doing what Barack and Nancy and Harry like.  You don't get credit for politically correct behavior.
You pay a percentage of your income to the government.
(They do have an alternative form, where taxpayers are allowed to take deductions for a few things like charitable donations, care of elderly relatives, and retirement savings.  Go here to read more.  But for the most part, citizens send in the form shown above.)

Now, think of the time and effort you've spent calculating your taxes.  Think of the tax accountants in the U.S. who have spent the last few months discovering tax loopholes, protecting their customers' money from the government, despite the fact that many of these same customers recently voted for a guy whose stated goal was for the government to spend more money.
Think of the things that your business can't do because of the tax implications.
Think of the employees you're now reluctant to hire because it would put you in a new Obamacare bracket.

If you're in the Obama administration, think of how much energy was required for you to be a successful tax cheat.
The Flat Tax is an idea whose time has come.  Hit the link to learn more. 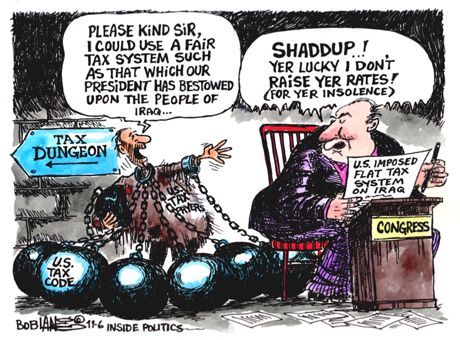 Posted by The Whited Sepulchre at 6:58 AM

We are an nonprofit representing the Azerbaijani-American community, and are trying to do research on health care, taxation and social security issues. Basically, through our research, we are overwhelmed with tons of information, and in order to be able to clearly and concisely formulate the choices to our members, we would be very interested in seeing some one-pagers outlining the pro's and con's on these topics. It would be also interesting to see what are other similar nonprofits thinking and doing. Being a grassroots organization, with a diverse membership, we need to be able to "keep it short" and easy to understand for busy people who don't particularly like or enjoy politics. If you have some tips, pointers and such information, could you please email it to me directly , or via our website www.USAzeris.org

Jan, good luck with that. We are now left with very little choice in any of those matters. The 'rules' also change so frequently and are so technical that the average person is unable to decipher them. I heard one congressman say that there is NOT a mandate to have health insurance, that those who choose not to carry coverage are "simply in a different tax category" than those who do. Does this sound like our lawmakers even know, or can communicate the legislation they just passed?

I direct a nonprofit corporation with less that $250,000 in cash flow each year. The government's reporting and tax rules alone compromise at least 40% of the administrative functions of our group. That leaves us precious few resources to actually accomplish the goals of the organization.

Libertarian tax form:
How much did you make? Keep It

Bureaucrats tax form:
How much did you make? Send it in.

Although I like the idea of a simple tax system, I think sometimes the motivation behind one is to encourage compliance and I do not like this reason for a simplier tax system. I think as libertarians we should try and bang the message that it is not how we are taxed, but rather how much that is the problem.