The even newer Food Pyramid, no, Food Plate

Or, in the words of one commenter, let's call it a Boondoggle Pizza.

I grew up looking at this pyramid on the back of my cereal boxes: 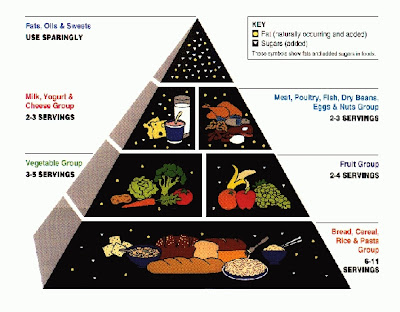 This dietary triangle was originally developed by the U.S. Department of Agriculture, at the behest of producers of wheat, bread, cereal, and rice.  Note that the government recommended between 6 and 11 servings of wheat, bread, cereal, and rice.  Funny how that works.
If you followed the government's dietary advice, you got fat enough to have your own planets and gravitational system.  Go here to read an earlier rant about the battles fought between Dr. Robert Atkins and the USDA.  It features this glorious Atkins quote about the cause of American obesity:

There is no doubt in my mind that this increase in refined carbohydrates has been spurred by the media attention given to The Food Guide Pyramid, created by the U.S. Department Of Agriculture, which made 6-11 servings of wheat derivatives the basis of the pyramid. I believe that the Food Guide Pyramid's recommendations have directly contributed to the twin epidemics of diabetes and obesity we now face in this country.

Well said, Dr. Atkins.  Well said.  It was bad, bad, bad.
Shortly thereafter, the USDA came up with a new food pyramid that looked like this:

This set of dietary guidelines didn't last very long, mostly because the illustration didn't make a lick of sense.
The government obviously wanted to retain the "pyramid" concept, since they didn't want to back-pedal and admit killing so many Americans, but they needed something so vague that it would kill fewer people but still allow them to spend a lot of money on their pyramid scheme.

(You'll have to trust me that this is what it looked like.  They've since scrubbed the site.)

Some of the accompanying propaganda still advocated a ridiculous amount of carbohydrates, but the percentage lowered considerably.

For a couple of years, the USDA didn't stack any more food into triangles.

Yes, we now have a USDA Food Plate.  The pyramid has been leveled. 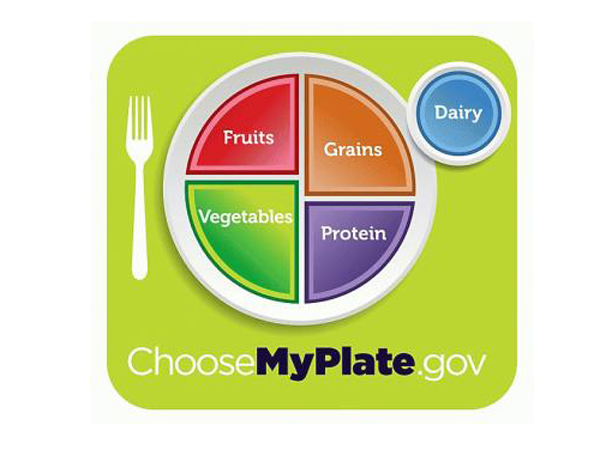 Wow, what a breakthrough! And if the food pyramid had any relevance to diet selection for Americans, it might even have been worth the two million dollars the USDA spent just to design the logo.  Yes, that’s right, it cost taxpayers $2 million for someone to draw a circle, cut it into four quadrants, and then attach labels like FRUITS and VEGETABLES.  The $2 million didn’t just go into the logo design, though.  According to the New York Times, they spent part of that money doing focus-group testing on circles with two lines, and on a Web site, too — as if millions of people will thunder to it to plan their dinners.

And it's still waaaaaay heavy on the fruits and carbohydrates, but we have the Florida and Iowa primaries to consider.
You would think that the simple matter of what to eat would be (ahem) "Settled Science" by now.

Go here to read the USDA's bullshit about Climate Change.
Posted by The Whited Sepulchre at 12:46 PM

Did you see this cartoon:

I grew up looking at a square, with four food groups.

I'm so glad that the government is around to tell me what to eat. I wonder how long it will be before there are laws requiring that restaurants have plates that are actually divided as depicted on 'My Plate' and have to serve meals that fit the mold.

I wonder how long it will be before there are laws requiring that restaurants have plates that are actually divided as depicted on 'My Plate' and have to serve meals that fit the mold.

These are the same people who brought us "Meatless Monday" and a $500 million deficit.