This hurts me.
I don't want to write this again.
I've written it before.
Here's why libertarians shouldn't support The Texas Rangers baseball team in The World Series.

Waaaay back when George W. Bush was just a pup, he was the front man for a group that bought The Texas Rangers baseball team. Bush brought a 2% share of the team using borrowed money. ($600,000.00) They wanted a new ballpark.
Bush's buddies could've built a new ballpark themselves, but why should they? You were there for them. Bush threatened to move the Rangers out of Arlington. His cartel spent about $125,000.00 campaigning for a 1/2% increase in the Arlington sales tax. The voters approved it. Bush and Company then trampled property rights, seizing land via Eminent Domain.
That's right.  They stole the land on which the ballpark was built.


All in all, the Bush gang profited from a total subsidy of $205 million dollars.
(Did he send you a thank-you note? Me neither.)
They had paid $86 million for the Rangers.
They sold The Rangers nine years later for $250 million. 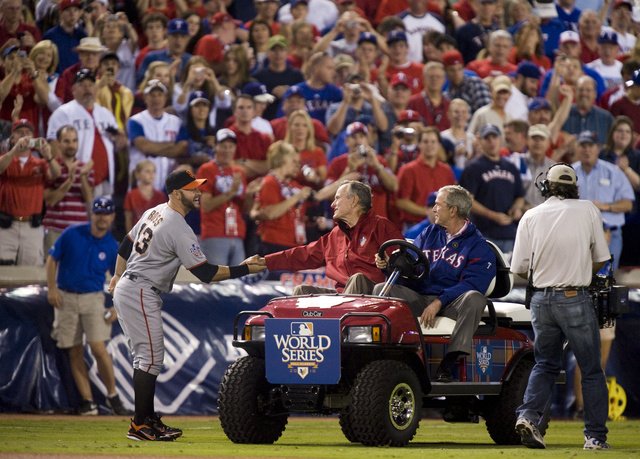 The team still stunk.
So what was different? Why the added value?
It was all in the stadium that YOU bought for them. The $164 million dollar profit was $38 million dollars less than the money that we put into the team ! ! !

My arch-nemesis Dr. Ralph likes to refer to the Iraq war as one of history's worst "bait-and-switch" deals.

"What followed (after the Rangers purchase) was an early indicator of Bush's extraordinary success at marketing. Bush is arguably the greatest salesman of our time, having sold not just friends but political opponents on a war costing more than a trillion dollars and thousands of lives with the kind of pay-no-attention-to-that-pool-oil-under-the-engine polish that used car salesmen only dream about."

Ok, they stole the land, they built a mega-stadium on the land, sent you the bill, and then sold the whole thing to Nolan Ryan and kept the overage.

Why do we put up with this?

I think it's because Juvanal said it best, somewhere around 100 B.C.   Give us bread and circuses and World Series appearances, and we'll support anything.

Posted by The Whited Sepulchre at 8:01 AM

I gotta say, if the Iraq war is history's biggest bait and switch, GWB learned the joys of B&S with Ranger stadium, though frankly Jerry Jones has surpassed him with Cowboys Stadium.

Arch-nemesis? That's a bit harsh, especially considering that I blow a mean blues harp for your Bob Roberts impersonations.

I'm still waiting to see all this oil we stole from Iraq.

You know, every bit of intelligence we had on Iraq was available for members of Congress to look at in a secure room. Take a guess how many members signed into that room.

I'll give you a hint: it's a popular nickname among conservatives for our President.

Congress didn't care what we knew or didn't know. They blew with the political winds. They feared being ripped apart if they didn't vote in favor of war. Those who did vote against it were just as ignorant as those who did. They opposed the war on philosophical grounds, not on wise choices based on facts.

Iraq is a better place with Saddam gone. The probability that democracy will succeed there is now greater than zero. There are still murders, but its not the systematic oppression by the government.

Scalia predicted that Kelo will eventually be overturned. In the meantime, nothing prevents state legislatures from stopping this. The citizens of Arlington voted freely for this. Sorry, but you got the government you voted for.

Citizens apparently like their baseball. There is enough profit in baseball to support thousands of teams. Protest against the MLB monopoly on baseball and the player's union

Regarding that intelligence, a 2004 bipartisan (9 R, 8 D) had this to say: "Most of the major key judgments in the Intelligence Community’s October 2002 National Intelligence Estimate (NIE), Iraq’s Continuing Programs for Weapons of Mass Destruction, either overstated, or were not supported by, the underlying intelligence reporting. A series of failures, particularly in analytic trade craft, led to the mischaracterization of the intelligence."

That being said, I think you're absolutely correct that Congress blew with the political winds - and didn't care.

As to Saddam - vicious thug? You bet. And the Devil to the average Iraqi. But was it our job to spent - what's the total now? - on an offensive, not defensive action?

It pains me to say it, but Ron Paul was one of the few to show any political courage in this sorry affair.

As to Baseball - no argument there either. I've *been* to Arlington and it's hard to work up a lot of sympathy for its citizens.

BTW, if the WS really wanted to bitch about eminent domain he'd do better to look at the stuff surrounding the on-going riverfront redevelopment happening *right now* in Ft Worth, where he's a taxpayer.

I prefer minor league ball, myself.

How 'bout them Rangers?

Ralph, I worked in intelligence for several years. In that work, you piece together limited facts with a lot of supposition. Your sources are always of dubious quality. The enemy constantly feeds you disinformation. Intel does the best it can. And for every report there is an equal and opposite report.

The Congressional panel you cite had the benefit of perfect hindsight. It doesn't take wisdom or courage to state, after the fact, that we didn't find anything.

But absence of proof is not proof of absence. the UN placed the burden on Iraq to prove they had disarmed, and UNMOVIC declared Iraq in noncompliance. On the eve of war, Iraq produced a voluminous declaration with no new information to delay and prepare for war. And only for the purpose of preventing war, Hans Blix changed his tune. He wasn't an honest broker of Iraq's recalcitrance. Where are the WMD? I'm not sure, but I'll bet they were moved across the border to Russia. We know Iraq didn't destroy them because they didn't allow witnesses, didn't produce residue, and didn't have the capabilities. I suggest there is lots of intelligence we had that was never publicly released.

If Iraq had fully disarmed, then the appropriate move would have been to lift sanctions. Correct? Everyone who said Saddam was "in a box" would have to argue to remove the box. Would we permit that?

Should we stand by while dictators and warlords murder thousands of people within their borders? I understand the argument of minding our own business. I just don't agree. The US shouldn't be the world's policeman, but it appears that much of the free world is content to free ride on our military expenditures and our political decisions. They are opportunists and cowards.

It appears the Rangers are suffering from the Eminent Domain Curse.

...But we were talking about Baseball, weren't we?

Let's see if the Eminent Domain curse continues to bedevil the Rangers - and the Dallas Cowboys, while we're at it. One can only hope.

Doctor,
I hope you understand that I NEED an arch-nemesis. Cedric is all the way over there in Korea, so you are it.

Nick,
Yeah, we haven't stolen any oil. But there's a reason we invaded Iraq and not N. Korea or Cuba.

I guess if one is going to be a nemesis it's more of an honor to be the *arch* nemesis. No sense in being a second-place nemesis.

I have the same problem with most other sports, and I say that as a season ticket holder of an NHL team.

Why do we spend taxpayer dollars so high school football teams can play games in states hundreds of miles away? How does that improve education? Ditto for colleges.