From Tim Carney with the Washington Examiner, with a fresh coat o' Whitening to Instapundit:

The most dangerous enemies of capitalism today are capitalists. This is becoming clearer every day to people committed to free markets.

The conservative and libertarian grassroots came to deeply distrust big business after the Wall Street bailouts and Obama's stimulus and health care bills, both of which had big-business backing. Tea Party ire focused on subsidy-suckling businesses as much as at big-spending politicians.

Beltway conservatives have also joined in the fight against corporatism. Last spring, the Club for Growth, FreedomWorks and the lobbying arm of the Heritage Foundation all lined up against the Chamber of Commerce and pressed GOP congressmen to vote to kill the Export-Import Bank, which nonetheless was reauthorized by an overwhelming margin.

Republican politicians, despite being lobbied hard by their big-business donors and K Street advisers, are nevertheless moving slowly away from corporate welfare and toward free-market populism. House Budget Committee Chairman Paul Ryan wrote an op-ed in Forbes in 2009 titled "Down with Big Business" (a headline he borrowed from a 1979 Wall Street Journal op-ed).

And now academia's free-market players are getting in on the game, beginning to rebuild the intellectual infrastructure to argue against corporatism. George Mason University's Mercatus Center this week is kicking off a series of papers on cronyism and business-government collusion.

"The Pathology of Privilege: The Economic Consequences of Government Favoritism," written by Mercatus senior research fellow Matt Mitchell, is the first installment.

(Go here for the download.  It'll make your head hurt.)

Here's how Carney closes his review of the research:

The research Mitchell brings together helps show why government-granted privilege is so important to big business and so costly to the rest of society. In one key finding, he highlights research indicating that free markets, with fewer barriers to entry and fewer bailouts to prop up failed giants, make it harder for dominant businesses to maintain dominance.

Big business wants safety, but big-business safety hurts the rest of the economy.

Disdain for bailouts and corporate welfare has resided primarily in the populist corners of the Left and Right. But the scholarly case against systemic privilege is strong and growing, too. The subsidy sucklers, bailout barons and regulatory freeloaders may soon face a challenge on a broad political front.

Lord hasten the day.  If Libertarians know one thing that the rest of the populace doesn't, it's this:  Big Business loves Big Government.

Go here for the T-shirt. 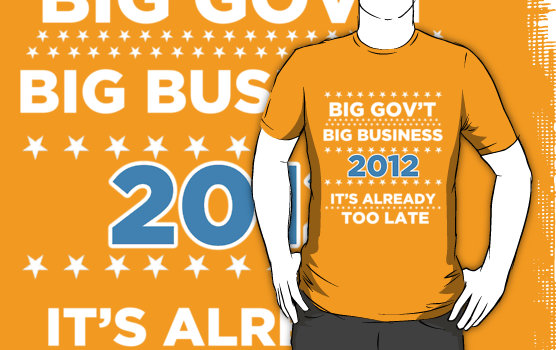 Posted by The Whited Sepulchre at 7:47 AM

You know, I really do agree with you on the subject of big business and big government.

The thing I find puzzling is how you manage to routinely froth at the mouth on the subject of "big government" and hardly say anything at all about the insidious machinations of big business. This is like railing against the evils of prostitution but turning a blind eye to the johns who hire the girls.

If big government is corrupt, why nothing about the corrupters?

Sir,
I will repent.
I think I've had a few rants about G.E., lots about the Farm Bill going to millionaires, the GM debacle and several others.
But I'll start ranting more about the other side.

One other thing....Solyndra, LightSquared, the windmill industry, etc.

I think they're all here.

Point is: you may mention all of those corporations, but it's always the Government that's the villain in your narrative. To make the point I made earlier, you rant about the prostitute but the johns get off with little more than a finger wag.