You may have read or heard that most of Chicago's public school teachers have walked out.  They're on strike.

The average Chicago family earns $47,000.00 per year.  The average striking teacher makes $76,000.00 and has an incredible pension.  Forget about that.  You see, the struggling Chicago families paying for this gaggle of union ineptitude are the equivalent of wealthy coal barons, selfishly eating lobster and smoking cigars while their ragtime bands play into the night.  The striking teachers are the Molly Maguires, wearing fertlizer sack shirts, and boiling rocks to make soup.  That's the dominant media narrative today, anyway.

79% of Chicago 8th graders aren't proficient at reading.  Here's something from a 7th grade teacher, perhaps one of the ones responsible for the 79% failure:

Many in the peaceful crowd said they were surprised at how many teachers showed up to rally.


"This is an amazing display of democracy," said Rick Sawicki, a 7th grade teacher at Evergreen Middle School. "It is a wonderful lesson for children and adults alike. I'm honored that we are all sticking together. We all want what is fair. We want to make sure everyone is treated fairly, just like I teach my children."

You might be wondering about the impact this is having on Rahm Emanuel, Chicago's new Democrat mayor.  Is Rahm having to stay home to take care of his three kids until their school reopens?


"Mayor Rahm Emanuel has decided to send his three children to the University of Chicago Lab Schools rather than put them in the financially strapped Chicago Public Schools he’s trying desperately to reform," the Chicago Sun-Times reported last year.
A phone call to the Lab Schools confirmed that it remains open. It is, after all, a private institution--and strikes are taking place in public schools.

The director's office, however, was not yet able immediately to confirm whether Emanuel's three children were in attendance today. (UPDATE: The school called back to say it wouldn't comment.) Emanuel's office did not respond to a request for comment

The Lab Schools are an expensive and elite Chicago institution. The website of the school high details the annual cost:

Good God in heaven !!  This almost puts Texas A and M into perspective. 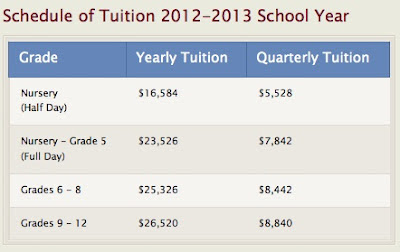 According to the school's website, it has a "rich academic and extracurricular offerings, [a] distinct approach to education, [a] diverse student body, and [a] unique relationship to the University of Chicago."

Hell yes, it has a unique relationship to the University of Chicago.  I bet most of the faculty send their kids there.

Anyway, for those of us who enjoy watching people reap what they've sown, this is a delicious moment.  Does Emanuel defend the Teachers Union, the one that has provided him and The Teleprompter Jesus so many foot soldiers and donations through the years?

Is he going to shaft those families making 47K in favor of those two-teacher families who make up the top 6% of incomes in the nation?

I bet he does.

Gary Johnson, Libertarian Party candidate for president, supports the idea of education vouchers..  We should all have options, just like the Emanuels and the Obamas.
Posted by The Whited Sepulchre at 5:50 PM

How about just abolishing public education? As a single male, I resent paying property taxes for others.