The good folks at DFW/NORML are letting me speak at their "Chronica 2012" year-end party.
Here's what I plan to say....

Hello, my name is Allen Patterson, and I’m Chair of The Tarrant County Libertarian Party.


For those of you who aren’t familiar with us, the Libertarian Party is dedicated to the radical idea that other people are not your property. I’ll be glad to talk with any of you about our beliefs later on tonight.

I’m here for four reasons, and I’ll be brief…..

From 2010 to 2012, straight ticket Libertarian voting DOUBLED, from 1500 votes to 3000. Think about it, folks….there are now 3,000 people in Fort Worth and Arlington who are willing to go to the ballot box and vote for your right to be left alone. 3,000 voters willing to stand up against the Prohibitionist. And you good people at DFW/NORML are responsible for a huge part of the increase. Shaun McAlister, I love you like a brother, sir !! And in 2014, we’re going to go for 6,000 Libertarian straight ticket voters, or die trying.

The second thing I want to do tonight is piss you off. How many of you have seen the new Quentin Tarrantino movie “Django Unchained”? Slavery was a horrible system, wasn’t it???

That movie was set in 1855. It was an awful time. People did awful things to each other. But in the year 2012, 155 years later, we have more black men living in steel cages, or on probation or parole, than The Confederacy had living in steel cages in 1855. Most of those guys are in that situation because of the Drug War. 31% of Florida’s black male population can’t vote. They’re convicted felons. Convicted for owning a weed !! (And Shaun, we’ve got to get some more Brothers into the movement. Agreed?)

Since Richard Nixon started the War On Drugs in the early 1970’s, our government has spent 1.5 TRILLION dollars (that’s a fifteen with eleven zeroes) on the Drug War. That doesn’t include the amount we suffer from lost productivity, by the way. 1.5 trillion dollars !!

So how many of you have ever voted for one of these people as candidates for President or Vice President, in a primary or a general election? Bill Clinton George W. Bush Howard Dean John Edwards Newt Gingrich Al Gore John Kerry Sarah Palin Gary Johnson Barack Obama ?

Guess what they have in common? They’ve all smoked weed. Just like the 1.5 million people who were arrested for non-violent drug charges in 2011, all of them, at some point in their lives, have lit up a fat one. If you get caught, you get locked up in a steel cage with violent criminals. If you don’t get caught, you can be President. Go figure. So why do all these former tokers and smokers still support the drug war?

It’s because if the War On Drugs were to end tomorrow, it would eliminate the need for approximately 1 million government jobs. Barack Obama has one million jailers, narcs, border patrollers, torturers, parole officers, probation specialists and prison contractors who are voting for the status quo.

So what do we do?

Colorado and Washington State recently passed voter referendums on marijuana legalization. HMMmmmmm….. Let’s do that. But there are still some legal hassles involving growing, possession, transportation and the like. We need some people on the inside.

That gets me to point number three. The Libertarian Party needs candidates. We want to give voters a choice between Freedom and Prohibition, instead of flipping a coin between Team Red and Team Blue. If you want to put yourself out there, we’re waiting with open arms. We’ve got three levels. You can run as a “paper” candidate, just to offer a real choice for your neighborhood. All we ask is that you fill out newspaper surveys about your campaign. Better yet, you can run as an “educational” candidate, someone who goes to candidate forums and college campuses and speaks about why freedom is better than slavery. Then there’s the third level – you go out and do some fundraising and sink some money into a campaign that will scare the crap out of the Prohibition Parties.

Plus, Tarrant County’s going to be doing something special in 2014. We’re going to look at this year’s results by precinct, we’re going to look at the opposition in each race, and we’re going to try to determine which part of Tarrant County already has the most freedom lovers and NORML members. Then we’re going to select one candidate for that area’s Texas House race. We’re still going to give all the other candidates some love and affection. But the big effort is going to go into that one campaign. And it could be yours. We’re going to have a winner. I’ve heard a lot of County Chairs say that they weren’t in the business of picking winners and losers among their candidates. Screw that. We’re going to pick a winner, and we need your help knocking on doors, making phone calls, putting out yard signs and stuffing envelopes. If you love freedom enough to be a part of DFW/NORML, you already one of us.

That gets me to point number four, and this is the last one. I don’t smoke, so I’m gonna go have a drink. Thanks so much for your support, your future support and your attention!!! 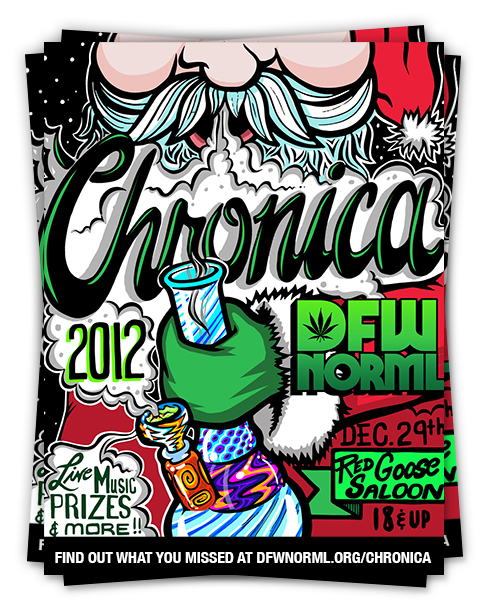 Posted by The Whited Sepulchre at 5:36 PM