The economy is creeping along, and there's a good chance of another recession.

The stimulus package was a flop, even by the standards of its advocates.

The national debt is approaching 17 trillion, and all that spending probably isn't showing up in your pocket, especially if you're under 30 years old.

All of this will be explained when Tarrant County's Liberty Book Discussion Group covers Henry Hazlitt's classic "Economics In One Lesson". We'll be getting together at the Barnes and Noble in University Park Village at 1612 South University Drive. Fort Worth, TX February 28th at 7:00 p.m. 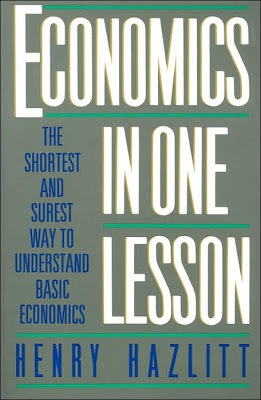 Our discussion will be led by Dr. Doug Butler, of the TCU Department of Economics. Dr. Butler earned his Ph.D. from Auburn University and specializes in Public Finance and International Economics.

We won't claim that you can finish the book in one sitting, but two should cover it. This is one of the few economics page-turners!! Hazlitt was once the literary editor of "The Nation" magazine, back when it was a Classical Liberal (Libertarian) publication. He went on to write economics columns for "The American Mercury" and The New York Times. H.L. Mencken of "American Mercury" once wrote that Hazlitt was "one of the few economists in human history who could really write." Hazlitt was a staunch defender of free market economics, and this little volume is packed with examples of what happens when governments involve themselves in make-work, wages, increasing the money supply, and....economic stimulus.

Even better, you don't have to buy the book!!! Copy this link to download a PDF of the entire volume.

If you suspect that there was no good reason for the recent "Fiscal Cliff" deal to include a huge giveaway for algae producers, NASCAR, and Hollywood productions filmed in "depressed" areas, but couldn't quite explain why, then this is the book for you. Hope to see you there!!

Posted by The Whited Sepulchre at 5:13 PM