The "Libertarian At A Dinner Party" Halloween Costume

I find this costume terribly offensive. 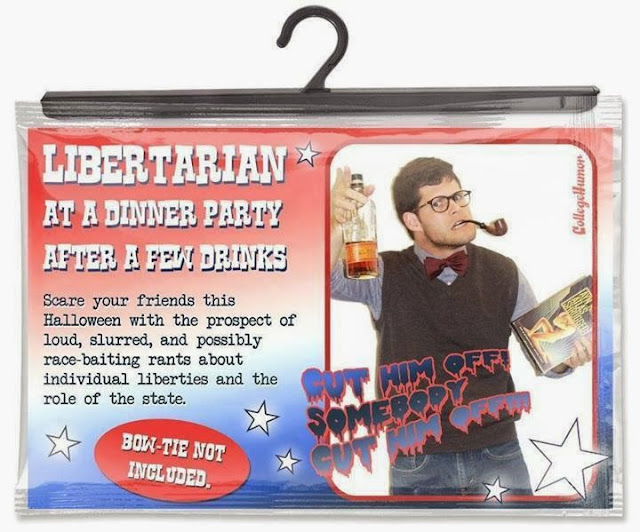 First of all, we don't smoke pipes, we do cigars.

Plus, out of the dozen or so copies of "Atlas Shrugged" that we all own, we would never bring our precious hardbacks to a meal at someone else's home. We have the small paperbacks for those events.

Unlike the clown in this picture, we always, always, always hold the labels of our liquor bottles toward the camera, since we are huge fans of corporations, branding, and private enterprise.

What else is wrong with this repugnant stereotype? THE GUY'S BOWTIE DOESN'T HAVE LIBERTARIAN PORCUPINES ON IT!!

(You should always get a LP proofreader to sign off on these images before posting them. God is in the details.)

And finally, I've never known a libertarian to deliver a "possibly racist rant", publicly or privately.

But I've heard several rants that would make anyone feel awkward who voted for Obama just because he was a black guy (i.e. - voters who are racists).

This picture is a stench in the nostrils of the righteous, and in a civilized society, it would be removed from the internet.
Posted by The Whited Sepulchre at 7:21 AM

Removed from the internet? Lol. I thought libertarians oppose censorship?