Why ObamaCare is doomed

Now that things are becoming clearer....

Don't get distracted by the problems with Obama's Facebook Page Healthcare website.  Here is why Obamacare is doomed.  I've been preaching this same sermon for about two years.  Hit the Healthcare and Obamacare links to your right for more rants repeating the same tiresome thing, some longer, some shorter.

Insurance guards you against the bad thing that hasn't happened yet.  If you pay a set amount of money to an insurance company every month or every quarter, they will make good your losses should the bad thing happen.  (Your house burns, you get a rare disease, or you wreck you car.)

We would never expect an insurance company to insure, and then pay for, a house that has already burned, or a car that has already been wrecked.  If that car that Paul Walker recently died it wasn't insured, no one is going to insure it now that it has been wadded into a heap of aluminum and burned.  But because the American Electorate has the collective intelligence of a pack of lemmings, we now expect insurance companies to blindly pay for a lifetime of medical treatment for anyone with one month's premiums in hand.

If a homeowner's insurance company can't take a pass on someone whose home has already burned, they are no longer in the insurance business.  They are overseeing a wealth transfer.

Obamacare declares that insurance companies can't turn away anyone with a pre-existing condition.  You can sign up for insurance in the freakin' ambulance.

Therefore, insurance is now unnecessary.  No 25-year-old is going to sign up for it with his own money.  The fine costs less than a tenth of most insurance.

I repeat....  Insurance is now unnecessary.  The kids aren't going to buy it.

This is going to be a disaster of Biblical proportions. 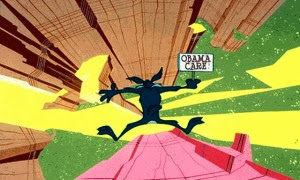 Posted by The Whited Sepulchre at 5:53 PM

I never saw it working. It sort of works in Australia but only because there's a homogeneous pop ulation that, generally speaking, has little patience for what they call dole blodgers.

Take that situation and add in about 25% to the population that has no such compunction and you can see it collapsing pretty quickly.

Of course this observation is RACIST and must be ignored.

"This is going to be a disaster of Biblical proportions."

Not yet. Those who get health care insurance from their employers have a one year reprieve. That's the vast majority of our non-Medicare population. The seven million or so people who are required to purchase an 'acceptable' private health insurance policy may be caught up in a mess (due to exchange screw-ups) unless the deadline is changed. Acceptable health care plans can be purchased without going through a government exchange, but few people know that.

The nation-wide disaster will strike in 2015.