How do you get people to purchase more of something?  According to the New York Holy Times, you raise the price.

How do you make yourself more attractive to employers?  Keep raising your requested wage until someone says "I'll hire you".

How do you increase employment?  According to the New York Holy Times, you put an added burden on people who purchase labor.

Go here.  They've come out with another editorial demanding that the minimum wage be increased by some random amount yet to be determined.

HOW HIGH SHOULD IT BE? There’s no perfect way to set the minimum wage, but the most important benchmarks — purchasing power, wage growth and productivity growth — demonstrate that the current $7.25 an hour is far too low. They also show that the proposed increase to $10.10 by 2016 is too modest.

You're damn right, there's no perfect way.  There is no way.

I want to be paid as much as possible for my labor.  Employers want to pay as little as possible.  That varies from person to person, industry to industry, and enterprise to enterprise.  And the last humans on earth that I would want to determine that rate?  The New York Holy Times Editorial Board, Barack Obama, and the U.S. Congress.  The "perfect" rate will be determined by political considerations, not economic ones.

I'm not going to rant about the racist origins of minimum wage legislation.  (Google the Davis-Bacon Acts.)

I'm not going to rant about the obvious fact that if your skills aren't worth $10.10 per hour, it'll be illegal for you to work.

One of the favorite talking points that these guys like to trot out goes like this....   "If wages had kept pace with productivity, workers would be earning 43.07% more per hour." 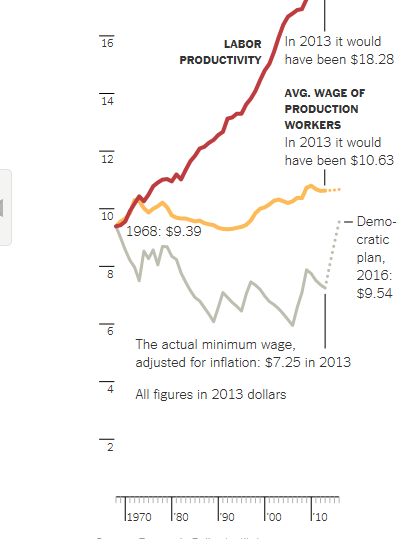 The other chart, the one they don't show, reveals that the iPhone in the typical minimum wageworker's pocket, would have cost 3.1 MILLION dollars in 1991.

Is there anyone who thinks that the world would be better if cell phone prices were in line with worker productivity?

200 years ago, something like 98% of us had to work on farms.  Food was a massive percentage of everyone's budget.  Do you with that your food costs reflect the increase in worker productivity, just out of fairness?

God, they make me crazy.

Posted by The Whited Sepulchre at 7:03 AM

Email ThisBlogThis!Share to TwitterShare to FacebookShare to Pinterest
Labels: Dead Horses - the continued beating of, Good for thee but not for me, Julie Borowski, minimum wage, New York Times

You forgot the "Go here" link.

Fixed. Dang it.
BTW, Buffalo Pete, I've admired your comments on Reddit for quite some time.
Thanks for your help!

Hey, thanks man! I'm always lurking around here, I know I don't comment often but I love your stuff!