For those without a young daughter, the Hunger Games/Mockingjay series is about a dystopian future where the children of the outlying regions are forced into gladiatorial combat for the purpose of entertaining the government elites at "The Capitol".  (Spelled with an "O"....)

Jones claims that the film is a "sweeping indictment of income inequality".

It's a sweeping indictment of the Van Jones political philosophy.

Here's a pic of the wealthiest counties in the U.S., most of which now surround the U.S. Capital.  (With an "A".)

Every dollar forcibly extracted from taxpayers goes to the Capital, and a little bit trickles back to the outlying regions.  This is what you wind up with.... 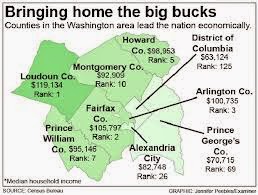 I bet a few kids wish they could be randomly chosen to get a free pass from the current mess by....

Naw, I'm not going to go there.

Posted by The Whited Sepulchre at 4:23 PM

We'll be catching it this weekend. Read the books, and also read a lot of different reactions about the story. It's like a Rorschach test - everyone sees what they want to see.