The Charlie Hebdo Cartoons of Muhammad

12 people were recently killed in a cowardly terrorist attack on the office of the French satirical newspaper "Charlie Hebdo".    These are the cartoons of Muhammad / Mohammad / that supposedly caused the bombing. 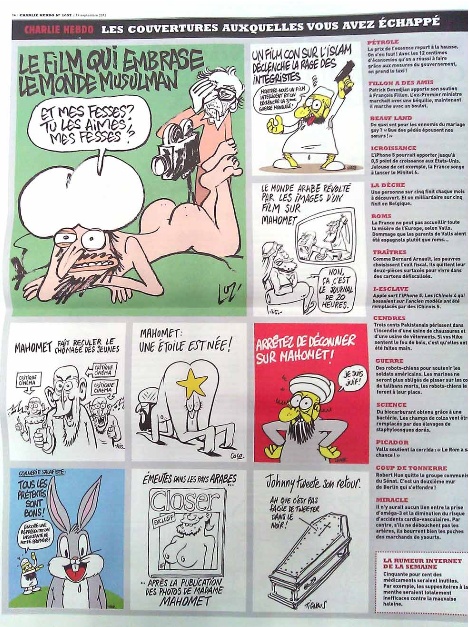 Compared to works like "Piss Christ", or portraits of the Virgin Mary made of elephant manure, they're pretty tame.

Has it occurred to anyone else that the more tolerant of religious criticism a society becomes, the more religion tends to flourish there?

For instance, you can go to New York City and see a musical play where a copy of The Book Of Mormon gets shoved up a Mormon missionary's ass.  The Mormon Church is flourishing in the USA.

Ditto for most other religions.

Go figure.  Let's hope France responds with increased satire and liberty, and not with calls for censorship disguised as sensitivity.
Posted by The Whited Sepulchre at 7:26 AM

Email ThisBlogThis!Share to TwitterShare to FacebookShare to Pinterest
Labels: cartoons, censorship, cowards, mohammed, mormonism, Religion, terrorism, that which I don't know much about but know what I like, The Religion of Peace

You are a brave man.