The latest discussion between Mommy and Daddy about who is going to drive the family car over the cliff....

I got home from work just in time to watch tonight's debate, but didn't have the intestinal fortitude to liveblog it.


It's already been done.

We had the introduction of Joe The Plumber, Bob The Builder, etc.


All I could think of was Dr. Ralph's McGregor The Fence Builder.

For a while, I considered answering the questions myself.... But most of the questions (from Fort Worth's own Bob Schieffer) had such an assumed bias of "how should government solve this problem?" that I blew it off.

McCain needed a home run, and he didn't hit it.

If you're wondering about the offensive anti-Sarah Palin T-shirts at the Obama rallies that John McCain mentioned? Click here.

I can't imagine anyone remaining excited about either of these guys.

We're 10 trillion in debt, the baby boomers'll be retiring soon, I can't find any high school graduates who can read a tape measure, the BiPartisans recently gave a trillion dollars to millionaires to keep the stock market from doing what it did today, we're in a war that won't be resolved in my lifetime, and the debate, once again, was over whether the candidates should be using hatchets or scalpels.

A pox on both their houses.... 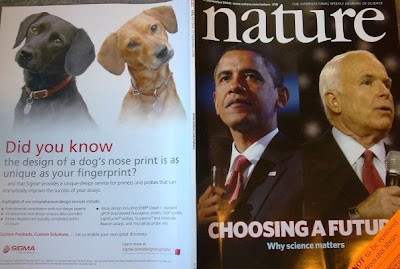 The magazine cover of the four dogs, like so many other good things in life, is from Counting Cats.

Posted by The Whited Sepulchre at 10:18 PM

The magazine cover with the candidates and the dogs...Good Lord. Where do you find this stuff?

Ya know, "a pox on both their houses" is great stuff -- but only if you're serious about it. You think Bob Barr is really the guy to lead us out of this wilderness, I'd love to read the reasons why. No cheating, and no shortcuts.

Dan,
I will affirm that Bob Barr is, at best, a carpetbagger who doesn't really belong at the top of the Libertarian Party ticket - esp. if past behavior is the best indicator of future behavior.

Part of the way you've stated your question, though, is flawed. I don't want Bob Barr to lead us anywhere. Nor do I want Obama or McCain to lead us somewhere. I want someone who will keep up the roads and sewer systems, keep the courts running, provide for the common defense, and other than that, leave us alone.

We shouldn't be electing a leader to lead us anywhere. Electing "leaders" is what got your share of the national debt up to $33,000.00
We should be trying to elect a Public Servant.

Imagine hiring someone to mow your yard. All you want him to do is mow your freakin' yard. But the next day, he presents you with a bill for invading the house down the street, educating your children, fact-finding trips to Europe, and taking over the payments on your neighbors lawnmowers - the neighbors who bought 350 horsepower riding lawnmowers with air conditioned cabs and CD players, and who discovered they couldn't make the payments.

I think you would advocate throwing him out on his ass, and try to find someone else to simply mow your freakin' yard.

You might see this response as cheating, or a "shortcut". But I don't understand how anyone could watch that total farce last night, and the continuing discussion about scalpels vs hatchets, and not throw newspaper, magazines, and dachshunds at the TV.

We need to elect someone who will Starve The Beast. Shut it down. Turn it off.

The only two people who have even given lip service to this common sense concept? Ron Paul and Bob Barr.

He likes to lick whipped cream off of strippers.

In Obama's closing remarks last night, he promised that, if elected, he would work tirelessly for us.

Anyone that would like whipped cream off of me, I would elect for at least one night.

Thanks Allen. I just thought it said we are all "going to the dogs" whichever way we choose. I enjoy going to the dogs actually and always manage to make a few quid at the track. Interestingly Greyhound racing really started in the US in the Depression as a cheaper alternative to the ponies. Is that the reason for the phrase?

Your lawn-mowing analogy is spot-on. Locke equated government with a secretary. And quite frankly the only worthwhile political theory consists of footnotes to John Locke.

OH I used "we" there. I mean it. Obviously as a Brit the US election is none of my business. But I meant it more generally.

I mean Cameron vs. Brown is a significant choice right?