There's another Fort Worth Libertarian blogger in our midst: The Browncoat Libertarian. I think I met this guy at Pop's Safari Bar last week. He was the one in the cigar bar with a copy of Reason magazine and a copy of Henry Hazlitt's Economics In One Lesson, if I'm not mistaken. 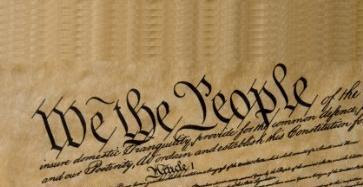 (Yes, at these Libertarian get-togethers you can gain points by out-geeking your companions. I almost went back to the truck for my copy of Liberty magazine and Thomas Sowell's Basic Economics - 3rd edition. But that might have been too intimidating.....)
I'm scraping the first post on his site, and leaving a few CLICK HERE blanks in the appropriate places, just to be sure you visit this guy's site.
The Red Pill/Blue Pill references are from The Matrix movies. Remember Lawrence Fishburne making this offer to Keanu Reaves in the first Matrix movie?
You are a slave, Neo. Like everyone else, you were born into bondage, born inside a prison that you cannot smell, taste, or touch. A prison for your mind. Unfortunately, no one can be told what the Matrix is. You have to see it for yourself. This is your last chance. After this, there is no turning back. You take the blue pill, the story ends, you awake in your bed and believe whatever you want to believe. You take the red pill, you stay in Wonderland, and I show you how deep the rabbit-hole goes. Remember: all I’m offering is the truth, nothing more....
TAKE THE RED PILL

When politics seeps into conversations I have with new acquaintances, it’s not long before I see curious eyebrows rise and the inevitable line of questioning begins:
“You’re a Libertarian? Really? Why? Aren’t you just wasting your vote?” 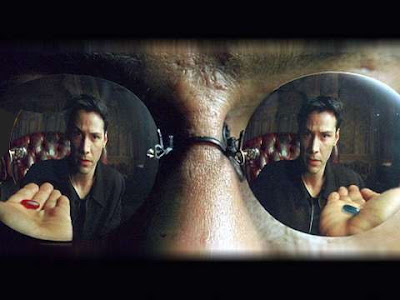 Yes. Really. I took the Red Pill. As of 2008, I'm a card-carrying Libertarian. Why? Because I'm through wasting my vote. In 2005, I threw up my hands in disgust and had a disturbing epiphany...the United States does not have a "Two-Party" political system, we have a two faction, ONE PARTY political system, a.k.a. "CLICK HERE".
After the ascension of George "Dubya" Knucklehead, I eventually realized that the Republican Party had abandoned everything that differentiated them from the big government, welfare/nanny state Democrats. It also became clear that the Democrats had finally caved and started pandering to the religious vote...so much for the party of "tolerance". I was past the point of no return...I had swallowed the Red Pill.
Clearly, the Democrats and Republicans are now one and the same...they are the CLICK HERE Party. Their similarities far outnumber their differences. They are the party of Big Government, irresponsible spending, and religious pandering, all driven by fear-mongering elitists.
Sadly, CLICK HERE voters blissfully fool themselves, as I once did, into believing they have a choice, that their faction is the right choice and that the other faction is wrong and must not be allowed to take power. Newsflash: no matter what faction a CLICK HERE votes for, or in many cases, against, they still end up with a big government, fiscally irresponsible, police-the-world nanny-state theocracy. A CLICK HERE government, fueled by truly wasted votes.
Most new acquaintances I talk with agree with the libertarian philosophy and the Libertarian Party platform of smaller government, fiscal responsibility, and enjoying personal liberty free of an Orwellian nanny-state, yet they won’t vote for Libertarian candidates for fear of “wasting” their vote, so they vote CLICK HERE.
Folks, it’s time to wake up and realize that a CLICK HERE vote is the real wasted vote. Take the Red Pill, vote Libertarian, and start putting liberty-minded people in office.
I hope this generates some traffic for your new site, Mr. Browncoat.
So next time I see you at Pop's, the drinks and cigars are on you, right?
Posted by The Whited Sepulchre at 10:49 PM

Whited, I thought you took little light blue pills with Viagra printed on them......

*Sends a high-five across the ocean*

I can read and use a tape measure. I had to use metric system over here to help build a elementary school(Yes, not everything is read in feet and inches)

Fembuttx,
For the first time this week, let me invite you to go to hell.

Glennanderson,
I, too, have encountered public school graduates who can read and write. Many of them are more proficient than I.
But good Lord in heaven....you'd despair after talking to some of the others. I've recently had to fill out job applications for three high school graduates. They were lost as sheep.

I work in manufacturing (and have done 5 stints in China). Therefore, I LOVE me some metric system.
It's much easier to divide and multiply everything by 10's than it is by 16ths (of an inch) 12ths (of a foot) or 3rds (of a yard).
I think the reason that it failed when they tried to teach it here in the 1970's...they spent too much time teaching conversion to the old system.

Now I think you need to take the little pink pill, you are awfully moody. You need an estrogen pick me up.

I thought the reason you didn't learn anything in the 70's because of free drugs, lots of stranger sex and rock and roll....didn't you learn anything by spending your time with your Mormon???
fembuttx takes the little pink pill, otherwise she'd shoot her mom!

Remember, I am now in the medicine cabinet business....I take little white pills with blue spots.....

I am slipping the little pink pills into my mothers morning tea....She says she feels like she is 21 again.

Thanks for the Plug-o-Rama, WS! Yes, I was the red-bearded one at Pop's with the copy of Reason & the Hazlitt book. Hope to see you at the next TCLP Cigar Lovers Caucus...

I was just making the same analogy the other day. Great minds think alike. And my mind too, I suppose.

The chances of contracting erectile dysfunction goes up substantially with age, increasing significantly above the age of sixty-five-which is rapidly approaching for the baby boomers. Although erectile dysfunction becomes more likely with advancing age, there is certainly no age cutoff for a sexually fulfilling life. Some men enjoy sexual activity even in their eighties and nineties. www.buy-viagra-with-us.com