I'm watching Chris Matthews, Rachel Maddow, and Keith Olbermann on MSNBC. They're trying to explain how Massachusetts, Massa-freakin'-chusetts, just elected a non-Democrat to The Kennedy Ancestral Senate Seat.
This is not possible. It's like a Republican getting elected in Yellow Dog Democrat-era Mississippi. I betcha two months ago, Vegas wouldn't have even given you odds on this upset.
Note to self: Make a point of watching Rachel Maddow more often. Study her habits. Is she insane? Why is she allowed on national television? Compare her logic to that of the O.J. Simpson jury.
Over on CNN, they're now showing video of disaster relief in Haiti, since it's less gruesome. I bet our Secretary of State, She Whose Name Is Not Spoken, is down there serving soup to refugees, giggling in her pantsuit about The Teleprompter Jesus getting a beatdown like this one from Massa-freakin'-chusetts.
Fox News is downright giddy.
Over here and over here, they're throwing Martha Coakley under the bus, talking about what a poor candidate she turned out to be, and making polite noises about the flawless Scott Brown campaign. 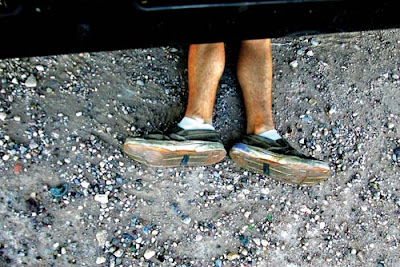 Well, I think Martha Coakley ran a good campaign. Let me explain.
Thomas Jefferson could've been the Democratic candidate. He could have showed up at campaign events with Sally Hemmings at his side (to show his commitment to diversity). T.J. could promise to sign replicas of the Declaration Of Independence all day long at every campaign stop, and he still would have lost.
Imagine any candidate having to support: The Bailouts. TARP. Cash For Clunkers. Card Check. The total lack of promised transparency. The G.M. takeover. The Porkulus package. 10% unemployment. The additional three trillion dollars tacked onto the national debt.
And for the leftists: Gitmo is still open. Wiretaps. We've actually increased our troop levels in the Middle East. The Democrats have all the votes they would need to legalize gay marriage tomorrow, and they haven't done it. We have 5% of the world's population, but 20% of its prisoners, and a sizable percentage of them are locked up for possessing weed.
And for anyone with one eye, half sense, and who can chew with his mouth shut: Have you actually looked at either one of the healthcare bills? Why do unions get a free pass on their Cadillac healthcare plans and the rest of us don't? Why aren't insurance companies allowed to, or forced to, compete across state lines? And why are the insurance companies and pharmaceutical companies lobbying for this bill?
Thomas Jefferson, our greatest statesman, would take one look at that pile of steaming pork and politely decline to participate.
Martha Coakley pulled off a miracle by breaking 40%.
Too bad the Libertarian candidate didn't fare any better. Joe Kennedy seems like a good guy. Oh well.
Picture of someone being thrown under the bus came from here.
Posted by The Whited Sepulchre at 9:22 PM

The Maddow recap was fascinating to watch.

Huan Tsu,
I agree with you about Chris Matthews' totally inappropriate comment about Scott Brown's kittens, but don't think he should lose his job because of what he said.

Thomas Jefferson wasn't necessarily the father of Sally Hemmings' children. DNA research can only show that it was a Jefferson male.

American Idol is a variety program in which amateur singers compete for a recording contract. Keith Olbermann has never participated.

Stephen M. Smith,
This was the first time I've watched her on anything other than Meet The Press.
Good Lord In Heaven, what a disconnect between her planet and mine.

Is she the MSNBC twit that Stossel showed a clip of, i.e. the "That's economic stimulus...TADA!" clip?

Browncoat,
That is the exact same twit.
Also, we miss you. All is forgiven. Please come home. We deeply regret our lack of doctrinal purity.

SMS,
That's the funniest line I've heard in ages, but it's such an "inside baseball" quote, that I really can't explain it to anyone without ruining it.
Greatness.