The Bureau Of Dangerous Stuff

The U. S. Constitution gives the Federal Government no authority to regulate alcohol, or tobacco, or firearms, or explosives.

So why does the Federal Government have a Bureau of Alcohol, Tobacco, Firearms, and Explosives?

Barry Hayes   Jeff, the FedGov does have constitutional authority to regulate any item crossing state lines for the purposes of commerce. However, that's where it stops.


John Spivey   Same reason we have Depts of Education, Energy, Health and Human Services, etc. Wait. What is that reason?

Karen Stack  The right to regulate interstate commerce seems to be sorta like the ring from Lord of the Rings...ultimate power to whoever holds it.

Bill Fason  Check out this hilarious cartoon from The New Yorker. 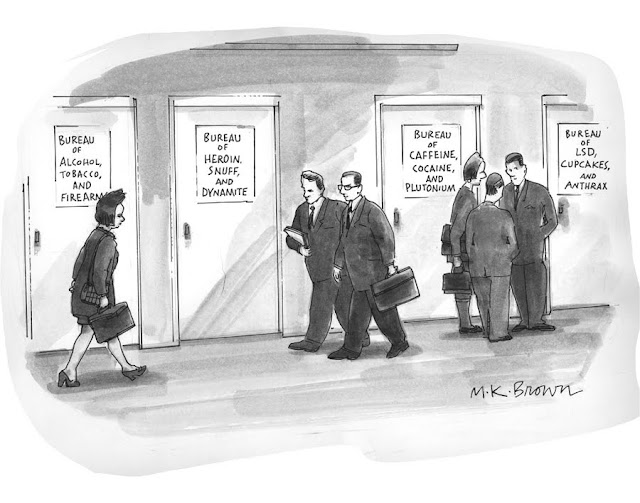 John Spivey  I'm waiting for a newly formed Dept of Bureaus which is not to be confused with the Bureau of Departments.
Posted by The Whited Sepulchre at 7:48 AM

The grouping of "Alcohol, Tobacco, and Firearms" always stuck me as odd, not to mention incomplete. Why did they leave off "Pickup Trucks?"

Alcohol, Tobacco and Firearms should be sold in convenience stores, not regulated by the Feds.

As far as I'm concerned, 'Alcohol, Tobacco and Firearms" should be the name of a convenience store. ;)