Here's a partial list of the aircraft that Gaddafi/Qaddafi/Khadafi is using to train pilots, transport soldiers, and move equipment in his campaign against the Libyan people.  I found it on Wikipedia, not the most reliable of sources, but it seems to check out.
Make and model is on the left, country of origin is in the center, followed by purpose, and then quantity on hand.

I know that we're trying to Save And Create Jobs in the military/industrial complex, but.... 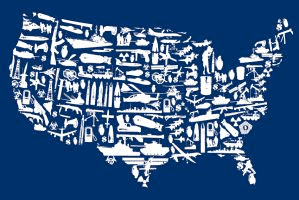 Did the Libyan dictator have to pass a background check before he purchased these?

Do we sell these planes and helicopters to Middle Eastern nutcases knowing full well that we would eventually be sending our own soldiers and pilots to fight against them?

Some of these helicopters went to Italy first.  Then they wound up in Libya.  Should Italy take responsibility for enforcing the much-discussed no-fly zone over Libya?  Especially since we're kinda busy elsewhere?

Manufacturing aircraft to sell to our enemies so we can boost our economy by blowing them up later....Is that a sustainable economic model?

Are the manufacturers of these aircraft not happier than old hogs in new slop, knowing that they might be supplying equipment to both sides in yet another conflict?

Should we not put some restrictions on this type of sale before we worry too much about forcing me to have a permit for a handgun?

The map of the Military/Industrial complex came from here.
Posted by The Whited Sepulchre at 7:38 AM

I cannot speak to the Hercules and Chinook but the Gulfstream and the Bells are civilian, commercial aircraft. They are widely available on the secondary market. Hell, even you could buy them (assuming you could pony up the cash).

Drug lords mount all sorts of armaments on SUVs - shall we restrict their sales, too?

Odd talk for a supposed free-marketer.

My ex was an Army aviator and spent time with units whose job was to train foreign pilots on American equipment. I always wondered what US military charged for that training and how the income was accounted for.

He is now retired and working for an American company that provides aircraft, training and 'parts'. His work travel takes him to the Middle East several times a year (since he moved back to the states from Egypt).

My point is as follows... If this raving lunatic can have access to our helicopters, planes, etc., which are obviously for military purposes, can I have a gun without Henry Waxman and Chuck Schumer interfering in the transaction?

Of course not, Whited. Think of how many jobs would be eliminated if you were granted your constitutional rights without any governmental oversight. Just as if we quit providing aircraft, weapons, ammo, and training to our enemies, I would not get a child support check. There you have it, my son's college education will be funded by the raving lunatic dictators. I feel a little dirty now.

Whited: Of course I believe that you should have your firearm without interference; but my initial point was that the types of equipment you mention are not 'obviously' for military purposes. i.e. Those particular models are not designed primarily as combat craft; rather they are general purpose vehicles. That being the case trade in them can only be objected to if one is reflexively criticizing anything done by the US. While that is an easy thing to do, falling into that trap jeopardizes our claim to rational analysis; so we should avoid it where it isn't necessary. In short: There's plenty to object to where the government is concerned, but this is small potatoes.

Whitey - our esteemed host delights in small potatoes, especially if pan-fried with a little butter.