Memorial Day - some gave all for Lockheed Martin

About 6 months after starting this website, I discovered the power of the Demotivational Poster.  If you've got the time and patience to create one, and it starts getting emailed and re-posted and linked, it'll drive a tremendous amount of traffic to your site.
I've tried to hit all the major holidays.
The link between "Demotivational" and the self-motivated nature of my ex-military employees came to mind when Memorial Day rolled around.  Here's what I did with it: 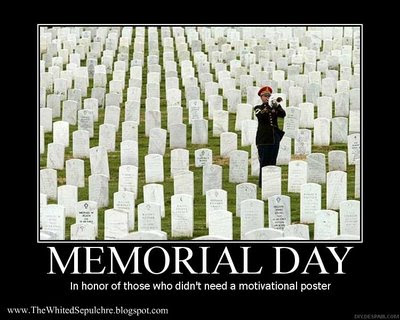 I now find myself wishing I could have a do-over with this one, and I don't know if I can articulate why.

Last night, after holding forth on a few political issues, someone asked me if I'll ever admit to being wrong about anything political.

I once thought that it would be a good idea to go into Iraq, overthrow Saddam, and set up a democracy there.  After all, he had slaughtered 90,000 Kurds, and was rewarding the families of suicide bombers.

I probably would've gotten behind the invasion of Libya, had it happened a decade earlier.

Had I been of age, I probably woulda supported our adventure in bringing democracy to Viet Nam.

We are often told that our military dead gave their lives "defending our freedoms".  But why do our freedoms need defending so much more often that those of, say, Canada?  Or Mexico?  Or Switzerland?  And why is the fighting for our freedom usually done in someone else's country?  Are our freedoms being violated in Afghanistan?

If Mexico were to decided that we needed a "regime change" in the U.S., organized a coup, and put a group more to their liking in power, we would resent Mexico.  We would bomb Mexican embassies.  We would try to kill their soldiers and citizens in dance halls.  But when we put Saddam Hussein's Ba'ath party in power in Iraq, did we really expect to be immune from any blowback?

If China were to remove our head of state and set up a China-friendly puppet, the way we did in Iran, I believe that we would take pride in undermining China.  Hijacking their airliners would only be the beginning of what we would do for retaliation.  Please don't get me wrong on this.  I'm glad we found Osama.  Killing women and children with airplanes crosses the line, if there is one.

If I could redo this poster, it would probably say something like "Memorial Day - In Honor Of Those Willing To Die For Their Politicians".  Or "Memorial Day - Some Gave All For Lockheed Martin".
Posted by The Whited Sepulchre at 1:09 PM

Interesting. It sounds like we have taken similar paths in our re-assesment of "America's role" in the world. On this Memorial Day, let's remember America's (an all nations')FUTURE fallen heroes. You can read more at my blog http://www.lookingforliberty.blogspot.com