A letter to my unborn grandchildren about ObamaCare ®.

To my grandchildren, who probably won't be born until around the year 2020,

By the time you're old enough to care anything about reading this, I'll probably be dead.  Please come see me at Greenwood Cemetery in Fort Worth, Texas.  If things go as planned I won't be in a grave, but in a Sepulchre - ideally, a very white one.

There's a kid named Josh Ritter whose music I really like.  If he's still alive and still making music, could you please drop by and play some of his new CD's in the cemetery for me?  Or his MP3's?  Or 8-tracks?  Or whatever people are now using to play music?  It doesn't matter.

The reason I'm leaving you this message is that I want you to understand how good we had it in the U.S. in the year 2011.    I'm afraid that my generations is not going to leave you very much to work with.  (This is off-topic, but on behalf of my generation, I apologize for leaving you with that massive national debt.  I hope your Chinese creditors are going easy on you, and allowing you to work it off on the weekends.)

Back to my point....Several months ago, the U.S. government passed a set of regulations that we're calling ObamaCare ®.   Our previous system had its faults, among which were over-regulation, insurance not being allowed to cross state lines, and excessive credentialing.  But people came here from all over the world for medical treatment.

During this same time period (I'm writing this in June of 2011, and I have no idea what kind of device you'll be using to read this in 2035),  England's socialized medical system had a goal of getting people into their emergency rooms in four hours.  That's four hours from the time a patient showed up until they were admitted, transferred, died, or were discharged.  Yeah, people died outside while waiting to be admitted to National Health Service hospitals.  The British government had a goal of treating all patients in 18 weeks.  (To us, this is a ridiculously long period of time.)  One British guy that I've corresponded with a few times has started something called the National Death Service blog.

For reasons that I still don't understand, we decided to imitate the British system.  Once again, on behalf of my generation, I apologize.

Just so you'll believe these things once existed, here are some pictures of billboards advertising the emergency room services of American hospitals in the Year Of Our Lord 2011.  Our 2011 hospitals actually bragged about their short waiting times !!   At the time this picture was taken (using a primitive device we called a camera), the waiting time at this hospital's emergency room was 13 minutes. 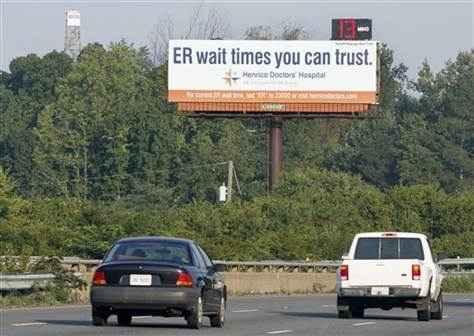 Think of how long you now have to wait and wait and wait to see the government-approved doctor for your zip code.  Compare that agony to this: 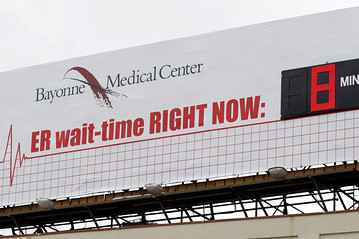 Don't you wish that your U.S. Government hospitals still had to compete for your business? 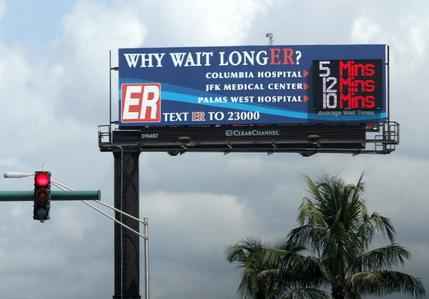 I hope you kids are doing well, and are staying healthy, and don't need hospitals.

Once again, sorry about that national debt.  I bitched and moaned about it online and tried to get people to vote Libertarian.  It was the best I could do.

There was another guy named John Prine whose music I really liked.  If you could find his CD called "Bruised Orange" and play it outside my sepulchre, I'd appreciate it.

I wish I could see you now,

Here's John Prine doing "That's The Way The World Goes Round" from that "Bruised Orange" CD.  I really liked this song.


Posted by The Whited Sepulchre at 6:41 AM

I would like to add my twopenneth about the travesty that is the NHS but can't. I emotionally can't.

Aplogies to your grandkids WS but if they ain't killed me by then I'll play some tunes by your mrble mausoleum.

Not of course by then will I be able to afford the carbon credits to the One True Goreacle (let graft be upon Him) for a flight to Texas.

It's not looking good anyway you look is it? You know when you're in a stricken ship another coming alongside feels like something Heaven sent until you realise they are listing heavily to port too and they call over asking for urgent aid.

I suspect the only feeling you have then is a sinking one.

Nick,
Great to hear from you again.
I'm astounded by the number of people who think that England's healthcare system is worth imitating.

Nicely written dude. I'm sure when your grandchildren finally do read this, it will almost be like they were there.