British Hospitals - People are dying to get in !!

From The Manchester Evening News comes a preview of what we'll experience with our new ObamaCare© medical system:

Two patients died after being left waiting in ambulances outside an over-stretched hospital.
The patients, believed to have been in their 80s, couldn’t get into the Royal Oldham Hospital for seven and 20 minutes respectively. 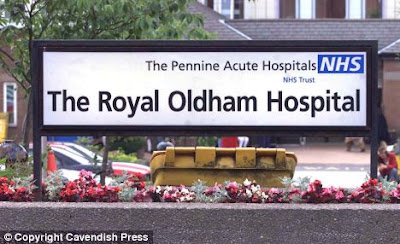 They were assessed by ambulance crews as ‘very sick’ and were both suspected of having suffered heart attacks.
The A and E department was so busy that all but the most urgent cases were being sent to other hospitals at the time. All five resuscitation beds at Oldham were full.
The two patients were assessed and treated by a casualty doctor and senior nurse in the ambulances.

It is understood neither actually had suffered a heart attack by the time they were admitted – although both later died at the hospital. One died in the resuscitation unit the following day and the other three days after being admitted to a ward.
A probe has been launched after ambulance chiefs reported the incident to regional health authority NHS North West.

Ah, the joys of Socialism.  From the comments, someone named Jay Tilzey writes:

After 35 working years of never bothering the NHS (but paying my contributions) I now need it and am appalled at how badly I am being let down by it. Hospitals are depressing, overcrowded, untidy places, I am rushed in and out of appointments (having waited months for them) without being given a chance to express myself, and find myself almost crippled with pain because of budgetary restraints or overloaded doctors (who should, nonetheless, ensure that their patients are not affected). It is no consolation to me, nor doubtless to the families of these unfortunate people, that many people have "positive experiences".

Only to be rebutted by someone calling himself Bolton Lad:

Thank you for insulting my many thousands of colleagues. It is lovely to know that our hard work and determination isn't appreciated anymore. Next time you need emergency treatment we'll just kick you out the door and you can crawl along to The Alexandra who will turn you away as they don't want blood on their carpet.

The main problem with the NHS is it is used as a political football and every time there is a Goverment change they feel the need to tinker with it. Just leave us alone and let us get on with what we were set up to do. Labour's reorganisations were only just settling in repairing years of cronic under investment and now the new kids on the block are making us change again. Is it any wonder beuracracy is rife.

Sorry, Bolton Lad, but for politicians, that's not a bug, that's a feature.  If you socialize medicine, it's going to be a political football.  Just like education, the roads, the sewers and the dog pound.  Why bother getting elected if you can't kick the political football?  Any time you turn something over to a gang of beauty contest winners, you surrender your control over it, and it becomes a political football.


Seriously.  Would it not be best to keep the government out of medical care, turn it into a free market system, and let private charities take care of the rest?


And to readers in the U.S.....  What levels of expertise do you think John Bolton, Nancy Pelosi, Michelle Bachmann, Harry Reid, Henry Waxman and Charlie Rangel are going to bring to our medical system when ObamaCare© kicks in?  Those characters are going to make the British look like Seal Team 6.

At this point, people are seeking waivers by the hundreds and hundreds (with an astounding number from Ms. Pelosi's district.)  What do you think will happen when your broken leg becomes a political football?

One last thing about the picture above...I was looking for a good picture of the Royal Oldham Hospital, and found it here, in an article about The Royal Oldham's staff wheeling a man outside to die of a brain hemorrhage because they thought he was drunk.
Posted by The Whited Sepulchre at 6:01 PM