Barack Obama makes The Clintons look like The Kennedys.
Yesterday (see previous post) he wrote the date as "2008" in the Westminster Abbey guest book.
Last night, it was time for someone to program the neural interface of The Teleprompter Jesus to propose a toast to the queen....

The president paused, the guests stood, and the orchestra prepared to play.

But the president wasn’t done speaking.
“The vitality –“ the president said before the orchestra began…
“To the Queen,” the president finally said.
He lifted his glass to her, she smiled a bit uncomfortably.
But because the song was playing, no one drank from his or her glass, including the president, who put his glass down on the table.
....Protocol, apparently, requires the toastmaster to wait until after “God Save the Queen” plays and then begin the toast. But the almighty O waits for no sovereign, so he launched straight into his shpiel.

From the comments in the Hot Air post from which this is taken:


and raise your glasses as I propose a toast to her Majesty”. . . [and they didn't. In fact not one person in the room picked up a glass other than Zero and the first non-lady(?). Meanwhile, Camilla shot a look at the Queen to see how she would handle it and took her cue from her.]

Zero didn’t notice, as he was reading the toast. Then the orchestra began to play. Buoyed by the dramatic effect, Zero’s voice swelled [thinking, 'dang, it's like they've set up Greek columns for me!'] as he quoted Shakespeare.

And then, alack and alas, he actually looked at the Queen, saw she held no glass, and put his on the table. His face revealed his utter mortification. Boy was he pissssed!

. . . and the Queen graciously raised her glass immediately as the song ended. /She didn’t drink to him either.

LOL Good times! But I am embarrassed for my country.

Don't they have a migrating herd of Protocol Droids to take care of this like this for the Teleprompter?  What are we getting for our money with these people? 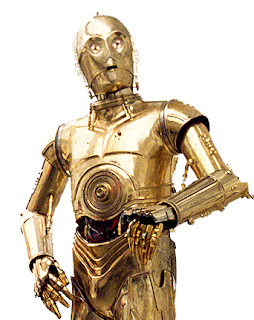 Barack Obama could screw up a brass donkey.
You could lock him in a padded cell with 100 ball bearings, and he could damage half of them in an hour.
He's made a total mess of the economy, no one knows how many wars we're now in, he's socialized two car companies at a massive loss to taxpayers, and the media keeps giving him a pass.
Amazing.
And as I said in a brief rant yesterday....

He (The Teleprompter Jesus) should not be in charge of your healthcare.

He shouldn't be in charge of sending your kids to die in Middle Eastern sandboxes.
He shouldn't be in charge of deciding who can and can't marry, what drugs you can and can't purchase or consume, what guns you can own, or what food you should be allowed eat.
He shouldn't be allowed to spend your money bailing out auto companies, stimulating the economy, swapping your cash for someone else's clunkers, or investing in green energy.
No one else should be given this much power, either. Not George Bush, not Ron Paul, not Saddam Hussein, not Harry Reid. They are all normal people, just like you and me.


Barack Obama is a generic, normal human that people want to turn their lives over to. I'll never, ever understand it. This is the man who gave the Queen Of England an iPod pre-loaded with his speeches.

I mean, Good Lord in heaven, people, he can't even propose a toast.
For lovers of small government, this is a golden moment.  Play it for your younglings.

Posted by The Whited Sepulchre at 7:18 AM

"Barack Obama makes The Clintons look like The Kennedys."

Hell, he makes the Beverley Hillbillies look like the Kennedys.

My only point in issuing that kind of Snark into the world is to point out that the man is a man. Nothing else. Two legs. Two arms. The standard number of noses.
He shouldn't be put in charge of anything that doesn't absolutely require a group effort - roads, defense, and a court system.
Putting him in charge of the economy, the money supply, the boundaries of Israel, or HEALTH?