Is it remotely possible that shortages are caused by price controls?

Regarding your report on the chronic shortages of consumer goods in Venezuela (“With Venezuelan Cupboards Bare, Some Blame Price Controls,” April 21): of course these shortages are caused by price controls. By preventing prices from telling the truth about underlying conditions of supply and demand, such controls spread economic lies. Producers and consumers are thus misled into acting destructively rather than productively.


Price controls, though, are only the most ham-fisted maneuver used by politicians to distort prices in order to mislead the public about market realities. Another favorite ploy is to condemn and threaten “speculators.” Consider Chavez himself. He irresponsibly increases the supply of the Venezuelan bolivar and then, when the inevitable inflation begins, combines overt price controls with a bellicose vow to punish what he sneeringly calls “bourgeoisie speculation.”

Such blame-shifting is very near a constant with politicians.

It’s worth noting that, although the President of the United States hasn’t the power of Generalisimo Chavez, Pres. Obama’s attacks on speculators are just as politically opportunistic and economically ignorant – and potentially as destructive – as are any such attacks issued by Latin American dictators. 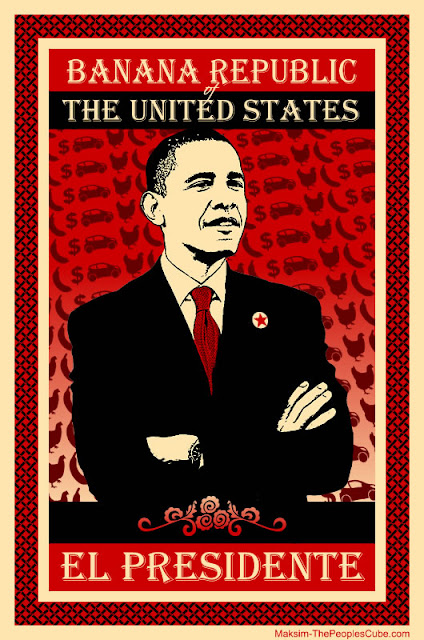 Ouch.  And his attempt at reducing the price of healthcare hasn't even kicked in yet.

The Obamabanana poster came from The People's Cube.    The George Mason University coffee mug shwon below was a gift from Dr. Ralph. 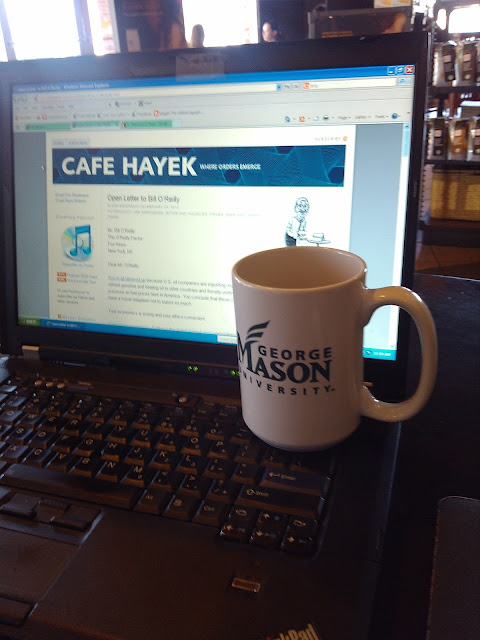 Posted by The Whited Sepulchre at 8:01 PM

Price controls are not new to Venezuela. I noticed while sitting out the hurricane seasons there during 1985 and 1986 (pre Chavez) that the government controlled prices were printed on the labels of all domestically produced consumer goods. We still have a tin Nabisco cracker can marked with Bs 12 (12 Bolivares) from 1986. Inflation was/is extremely high there. In 1962 the Bolivar was on par with the US dollar. by 1986 it was Bs21= USD1.00. In 1980 Nicaragua 6 months after the Sandinista Revolution the Ortega government was handing out freshly printed banknotes to all revolutionaries. The problem was there was nothing in the shops to buy. The only ones "prospering" were the Cuban "advisers" staffing the schools and government ministries. They had Russian cigarettes to trade for food staples. It is always thus with "progressive" governments.