Which candidate would never eat your dog?

David Huckabee, son of Arkansas governor and former Republican presidential candidate Mike Huckabee, once hung a dog and then slit its throat.   The governor had to pull some strings to make the story go away.

Republican presidential candidate Mitt Romney once put his dog in a carrier, strapped it to the roof of his car, and drove 12 hours to Canada.

According to his book "Dreams From My Father", our current Commander-In-Chief, Democrat Barack Obama once ATE a dog.  (Hit the link.  Please.  Then imagine The Teleprompter Jesus sitting down to a meal of Fido and French Fries.)

Libertarian presidential candidate Gary Johnson, in his last debate appearance as a Republican, quipped that "My next-door neighbor’s two dogs have created more shovel-ready jobs than this president."

So let's be honest here....based on these anecdotes, which candidate would you trust with your dog?

My vote goes to Gary Johnson !!

He would never, ever eat your dog. 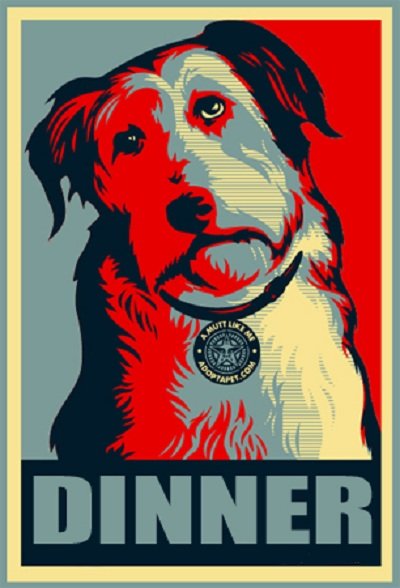 The picture of Obama's lunch came from here.
Posted by The Whited Sepulchre at 6:00 PM

From the Wall Street Journal:

One time Barack Obama went to an Indian restaurant and ordered the lassi. Was he ever disappointed when the waiter brought him a yogurt drink!

Happiness is a warm puppy, with a side of fries.

I wouldn't vote for that guy for dogcatcher.

Did you hear about the insomniac polyphagiac president? He lies awake at night wondering if there is a dog.