Now that Thomas Kinkade is dead

Jon McNaughton, who is sorta the Shepard Fairey for the far right, has produced another masterpiece.

I'm just guessing, but I bet McNaughton's paintings appeal to the same folks who like those paintings of golf courses with verses from The Psalms written on the mat below the canvas. 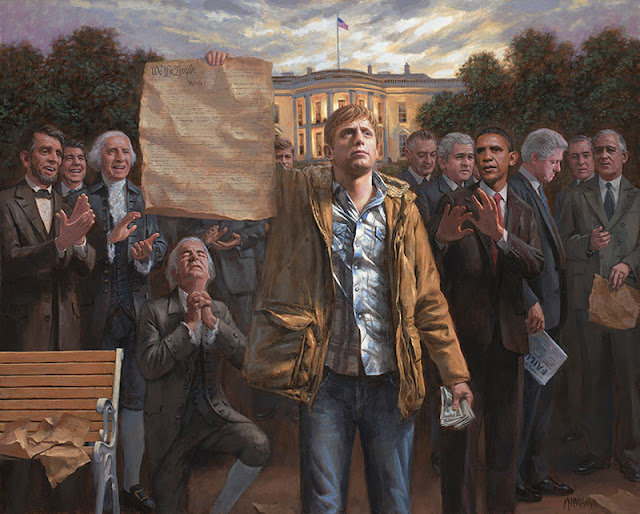 You can go here for the artist's interpretation of the work, or you can read mine, which was produced by something called "Pixmaven", the instarnt art critique phrase generator.

In the center, the view sees a young man from the 99%.  He's holding a copy of the "restored" constitution in one hand and a wad of cash in the other.  There is an obvious correlation here, with regard to the issue of content, the subaqueous qualities of the spatial relationships brings within the realm of discourse the exploration of montage elements.

A random selection of presidents are shown applauding on the left side of the painting.  Libertarian viewers might be perplexed by the applause coming from Reagan and Lincoln, as Reagan spent money like a crack whore on parole and got into some nasty stuff with Iran/Contra.  Lincolndid what he had to do, but a lot of it wasn't constitutional.  I find this work menacing and/or playful because of the way the reductive quality of the ironic motifs which spatially undermine the accessibility of the work.

The president on his knees in prayer is none other than James Madison, father of the constitution, but also the guy who once said "Religious bondage shackles and debilitates the mind and unfits it for every noble enterprise."  What was McNaughton up to here?  With regard to the issue of content, the aura of the spatial relationships visually and conceptually activates the exploration of montage elements.
This is obvious once you think about it with an open mind.  Thank you, Pixmaven, for the analysis.

To the right of the painting we see the bad presidents.  How do we know they're bad?  Because they're afraid or sad.  From left to right (a colonial construct, but it helps) we see: LBJ, Bush the Younger, The Teleprompter Jesus, Clinton, Wilson, and FDR standing without a wheelchair.  Obama's fear of the Constitution, his defensive posture, and avoidance gestures are an obvious homage to the neglected classic Nosferatu Looking At A Cross (Norman Rockwell, 1958).

In summary:  Although I am not a painter, I think that the aura of the purity of line notates the distinctive formal juxtapositions.

With regard to the issue of content, the disjunctive perturbation of the sexual signifier contextualize a participation in the critical dialogue of the 90s.

As an advocate of the consumerist aesthetic, the remarkable handling of light in this piece recreates the post-colonial tensions often found in the sexist/fascist/extremist paradigm.
Posted by The Whited Sepulchre at 6:46 AM

Email ThisBlogThis!Share to TwitterShare to FacebookShare to Pinterest
Labels: bad to worse, jon mcnaughton, life imitates art, presidents, propaganda, that which I don't know much about but know what I like, with friends like these - who needs enemies

"I find this work menacing and/or playful because of the way the reductive quality of the ironic motifs which spatially undermine the accessibility of the work."

This is partially true. We do not want to take away the spirit of the piece. But I hope that those who acknowledge their own knowledge of history, as the painter does in his descriptions of FDR and Coolidge, can fully examine all of the history involved in their statements.
Mostly, reverence of Reagan does not follow the spirit of the peace because his military spending was justified by the lie of a strong Soviet Union. The USSR was collapsing without any intervention from the US from its own borrowing and incompetence. Reagan is also known by many as the first of the corporate presidents. It is really tragic that he is remembered as he is. It is a testament to the success of government misinformation in the same way as is the legacy of FDR and the New Deal.

It bears an unmistakable resemblance simultaneously to both Stalin era Socialist Realism and Nazi-approved art of the Third Reich. There's always been something about brutal dictators and heavy-handed bad realism.

Living in a society where Kinkaide and this joker are elevated to celebrity status is why I don't regret giving up my art career to take up IT work.