Here's what I want, and why I put in a good number of hours with the Libertarian Party each week trying to reach these goals

1)  I don't want my tax dollars going toward killing people, exceptions being a declared war on another country.

2)  I want the U.S. military to defend the U.S.'s borders and not those of Korea, Japan, Germany or anyone else.  Letting Hillary fly all over the place seeking out monsters to destroy is not a value-added activity.

3)  I want to end the War On Drugs.  I don't want to leave the Mexican or Afghan Drug Lords with a monopoly on anything.

4)  I want to end regulations and bureaucracies that give privileges and tax breaks for approved behavior.  i.e.- "I propose a tax break of 4% for small businesses who employ...."  or "we will protect American jobs by imposing a tariff of...."

5)  I want to get  Barack Obama and John Boehner and Harry Reid and Rick Perry out of the marriage business.

6)  I want to legally bet large sums of money on Dallas Cowboys opponents.  And I want to place those bets in Fort Worth, TX without worrying about the police intervening.

7)  I want to remove all price ceilings, price floors, subsidies, set-asides, and quotas in the purchase of merchandise and labor.  However, those who like the idea of Barack Obama and John Boehner and Harry Reid and Rick Perry getting up in their bidness should be allowed to pay as much as they want.

9)  I want a competitor to the U.S. dollar.  If Starbucks agrees to accept a currency printed by Wal-Mart, that's nobody's business but mine and Starbucks'.  (Prediction:  In five years, Coke machines will accept $5 and $10 U.S. dollar bills.  American paper won't be worth.....paper.)

10)  I ewant to end asset-forfeiture laws.

11) Before I die, I want to attend a midnight screening double-feature screening of Reefer Madness and Al Gore's An Inconvenient Truth.

12)  Since I am pro-choice, I want tax-paying parents to have a choice between public and private education.

13)  Ok, this one is complicated.  Feel free to skip it if you havne't already skipped all my other caffeine-fueld crap....   I want to briefly exist in an alternative universe where ObamaCare becomes the law of the land, exactly as written.  I want ObamaCare's authors to get everything they wanted.  Especially the part where the penalty for no insurance is much, much cheaper than insurance.  And the part that needs 4,000 more IRS Agents.  And the part that calls itself "Affordable".  I want to take notes in this alternative universe for ten years and then come back to this universe with a full report.

14)  It would be nice if everyone who advocates School Prayer, Ten Commandments In The Courtroom, etc., to spend just a little time reading about The Dark Ages.

15)  I would like for the Department Of Transportation's CSA 2010 program to be replaced by two sentences:  "If your vehicle harms someone else, you must compensate them for the damages, the inconvenience, and the loss of future earnings.  Driver and vehicle standards are now enforced by 3rd party insurers, and you must have insurance to drive on our roads."

That's all I want.
If I don't get what I want, I'm going to strangle these dachshund puppies. 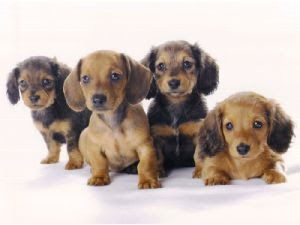 Posted by The Whited Sepulchre at 9:51 AM