Why isn't Mitt Romney doing better?
You can go here and see a very small sample of the hand-wringing about Mitt's distressing polling numbers.

Think about it.  A blind dachshund with 3 legs should be outrunning Barack Obama in this thing.


We've got a president who has racked up more months of 8% unemployment than the previous 11 combined. 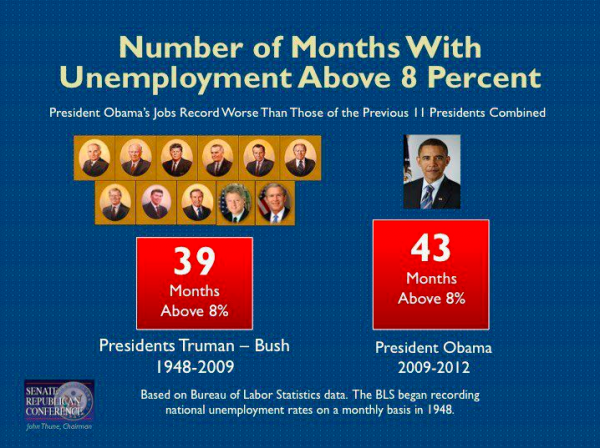 Barack Obama used your money to purchase about 675,000 vehicles, and then destroyed them.  Cash For Clunkers.  (He should've been impeached for this, BTW.)

His Fed Director is about to print a 3rd batch of money, since the first two batches didn't work.  (Swear to God, that's what they're saying.)

We're 16 trillion dollars in debt.  Most people who own a computer, and who give a crap, are aware of that number.  Obama went on Letterman acting as if he wasn't sure of it.  Sheesh....

So why isn't Romney doing better????

The Mitt/Paul Ryan budget doesn't get us out of deficit spending for a freakin' decade.  Go here to read a Reason Magazine summary of the thing.  And remember....no congress can restrain a future congress's spending.  When Obama/Mitt/Ryan talk about achieving balanced budgets over a _____ year period, instead of now, today, this very minute, they're blowing smoke.  Seriously.  Can you imagine the current bunch of yahoos restraining spending because of Gerald Ford's long-term budget scenario? The only cuts that matter are the ones made NOW.

Mitt Romney hasn't proposed shutting down a single cabinet-level position and department.  Not energy, not education, and not commerce.  No serious candidate who wants to get us out of the hole we're in would dream of letting those money pits remain open.

Mitt Romney hasn't talked about closing any military bases.  We've got more military than the next 16 or 17 countries combined.

Mitt Romney, like Obama, is a Drug Warrior.  We could end the Drug War tomorrow and eliminate one million government jobs, from Drug Czar all the way down to 3rd level torturer.

Mitt Romney opposes gay marriage.  If you're 16 trillion in debt, you shouldn't have time to oppose gay marriage.

That, IMHO, is why Mitt Romney isn't doing very well right now.  And this election ought to be a slam dunk.

So if you live in a "Red" state, one that's probably going to go for Romney anyway, no matter what, then there's no reason to vote for Romney or Obama.  It's a wasted vote.  You should vote for the only small-government, anti-drug war, pro-civil liberties candidate on the ballot.  Gary Johnson.  He's pledged to submit a budget that's 43% smaller immediately.  If you're not sending that message about what you support and what you oppose, then you're part of the problem.

And if you live in a "Blue" state, one that's probably going to go for the other Obamney anyway, no matter what, then there's no reason to vote for either of the Obamneys.  It's a wasted vote.  You should vote for the only small-government, anti-drug war, pro-civil liberties candidate on the ballot.  Gary Johnson.  He's pledged to submit a budget that's 43% smaller immediately.  If you're not sending that message about what you support and what you oppose, then you're part of the problem. 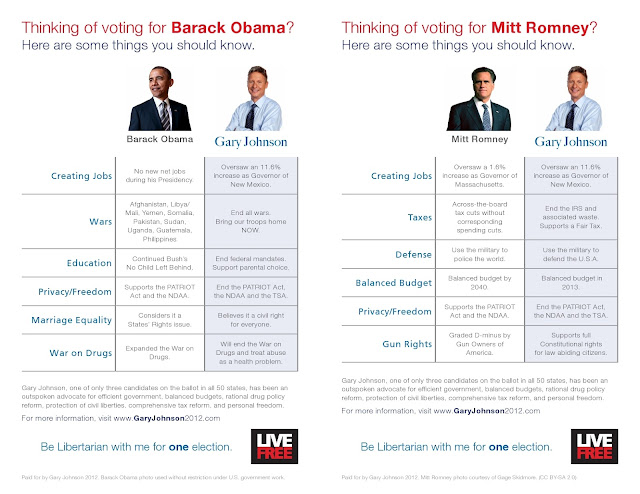 Posted by The Whited Sepulchre at 5:47 PM

It's an IQ thing. You wouldn't understand.

How much money you made speculatin' on gasoline, boy?

IB,
If ONLY I had invested in gasoline at the beginning of Obama's term....
If only....

Demand and supply have remained the same, but the price has doubled.
You'd almost think that O was in bed with the oil companies, wouldn't you???

You DID. You invest every time you buy gas. Your own words, dummy.

Remember what gas was at the beginning of Bush's term? How about the energy task force meetings in Feb of 2001?

Face it, you're not bright.