From The Splendid Table

A professor at NYU has attempted to read the entire 2012 Farm Bill, and teach its contents to her students.
It ain't pretty.

Go here for the whole thing.

Lynne Rossetto Kasper: You decided to teach the farm bill. Why?


Marion Nestle: Well, I didn't know anything about it. I knew that I would be asked about it by reporters, because I'm asked by reporters about everything and they think I know everything. In 2006, when the previous farm bill was under discussion, I actually tried to read it. I opened up the file that was on the Internet and the table of contents was 14 pages long. The entire thing was 663 pages and it's totally incomprehensible.

So, I've decided to take it on, and I must say I've had moments when I've regretted it deeply. But it's been absolutely fascinating and the class is enormously exciting. I've got 45 students who are jumping out of their seats because what they're finding out is so absolutely amazing and none of us knew any of this before. We're learning it together.

LRK: What's making them jump out of their seats?

MN: Well, it's so astonishingly irrational it just takes your breath away. This is a bill that started in the 1930s and has been added onto incrementally without anybody sitting back and saying, "[What would we do] if we wanted to promote farm policy -- a rational farm policy we all agree would feed everybody, would make a living for farmers, would protect farm workers, would protect the environment and would promote health?"

Some things are so completely irrational they just take your breath away. For example, if a commodity producer decides to grow vegetables, that producer will either lose all of the subsidies he's getting or will have to plow the vegetables under. They are required by the way this law works to plow them under, treat them with Roundup and kill them, or let them freeze. But they're not allowed to actually grow and sell them.

There are real discouraging things in it that actually discourage the production of fruits and vegetables. You would think that somebody in Congress would sit back and say, "OK, let's take a look at this and let's try to get agricultural policy aligned with health policy." But that is so far from the political reality that what this course is really about is the political realities and what you have to do if you want to change those realities.

LRK: Is there any way for the consumer to get any kind of say on any of this?

Each section of the farm bill covers different kinds of programs. These range from tiny earmark programs that affect only a few people, to things like food stamps and the SNAP program, which affects 45-50 million people.

What the food assistance programs are doing in the farm bill is another thing. Neither one of them could be looked at rationally because they're completely linked. The reason that they're linked is the senators and House members who have interest in one or another aspect say, "I'll vote for yours if you vote for mine."

So, the food assistance programs are held hostage to farm subsidies and the farm subsidies are held hostage to food assistance programs. You cannot read the farm bill because each aspect of it refers to amendments to previous bills. So unless you know the 30 different previous bills that have been passed, you really can't. It doesn't read like a text.

One more point: Nobody in Congress can understand it either.

The Whited Sepulchre: No, having a Department Of Agriculture, with Food Bills and Farm Bills and an "Agricultural Policy", all at the mercy of political contributors....That's what's scary. 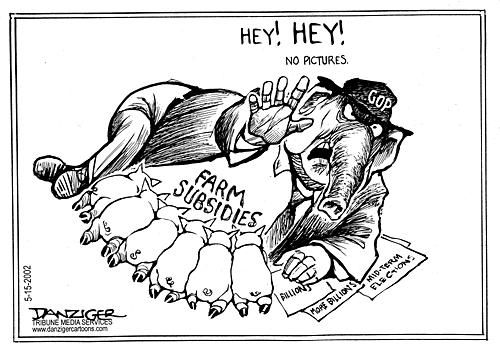