The Hollywood Holocaust. Not !!

Go here.  I hope you'll read the whole thing.  It's about the "Hollywood Holocaust", when a lot of Hollywood screenwriters lost their jobs because of their communist sympathies.

And then contemplate this quote from one of my heroes, Glenn Reynolds:

Leaving aside the obscenity of comparing out-of-work screenwriters with gassed Auschwitz inmates, there’s this: Communists are no better than Nazis. Refusing to hire Communists is on the same moral plane as refusing to hire Nazis. Which is to say: It’s a good and admirable thing, not a sin. Go broke and starve, commies. It’s what you deserve for being eager, willing servants of totalitarianism.


That's kinda harsh, considering that there are major differences between the Nazis and the Communists. 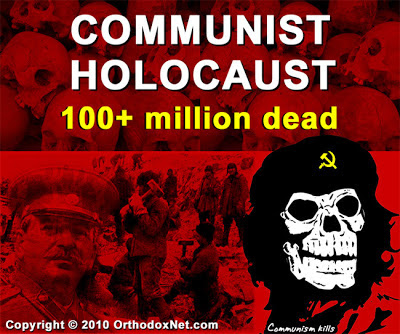 Seriously, would you hire a skinhead who came into your place with swastika tattoos?
I didn't think so.
How about the kid who comes in with a Che T-shirt?

Posted by The Whited Sepulchre at 7:00 AM

One of the things we learned, post-Cold War, was that Soviet infiltration of Hollywood and American government was greater than even Joe McCarthy ever imagined.

The Rosenbergs not only stole information related to nuclear weapons, they ran a spy ring that stole numerous state secrets including the plans for our first jet fighter. The damage they caused was immeasurable.

Now I don't expect the Soviets to have spied on us any less than we spied on them. Our hands aren't clean. But that misses the point. Evil in their government was a feature, not a bug. And regardless of which side held the moral high ground, Soviet infiltration and the work of their American sympathizers was anti-American.

We didn't have a Red Scare. We had a Red Threat.

Hey, I really don't hope anybody starves, as in the Reynolds quote.
But the Blind Eye that we've turned to Commie evil makes me ill.
I think it's because their intentions were so....pure.
Gag me.