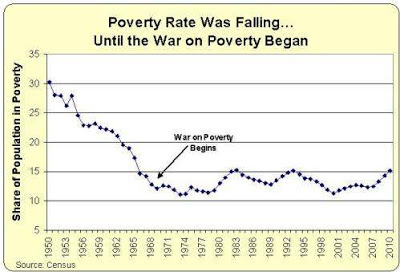 Note to self:  Create another chart showing how Islamic Extremists were dying off until our government got involved in trying to kill them.
Posted by The Whited Sepulchre at 4:23 PM

I was just about to write this post, and you beat me to it.

My questions to those of you who support the government:

How long are you going to continue to support a government that fails at everything that it does?

How many years, and trillions of dollars, will it take before you realize that the government is too thoroughly incompetent to achieve anything good?

It kinda reminds me of the infamous chart that The Obamessiah's economists put out at the beginning of the economic "crisis".

An Unemployment Rate worse than anything projected by anyone.

But the Statists just smirk and talk about how much WORSE it coulda been without government involvement.

Consider the source of the little graph you base all this off: Daniel Mitchell, yet another Libertarian economist whose entire academic career was spent in public schools -- high school AND college. Funny how so many of these guys have gotten a great education at public institutions, and end up sucking the teat of George Mason, another publicly funded institution.

Before worshiping before his chart, I suggest (yet again) you re-read Huff's "How to Lie With Statistics." Someday you'll thank me.

Doctor, Doctor, Doctor,
I use that the info in that link all the time (mostly to debunk our government's claims about the unemployment rate).
Please let me know where this chart has gone wrong.

Also, I grew up as a recipient of goodies from The Farm Bill. I now oppose this type of corporate cronyism with every fiber of my being. I also went to public schools for a while, and went to a public university. But somehow, I can handle the guilt and still be a libertarian.
Dwight Eisenhower warned against the military-industrial complex that the government was slowly getting into bed with. He hated it. And yet he still cashed his paychecks.
Ron Paul worked all day every day for a smaller government. He still took the checks.
You can work to improve something and still be opposed to some of its practices.
I don't want my employer to open up a manufacturing center in North Carolina. But I still sell them my time and effort all the same.

And please let me know what's wrong with that chart....

The "War on Poverty" was announced in 1964 by LBJ, who left office in 1968. Why does Mitchell claim it started in 1968, when Nixon was elected? Plus, where did he get his numbers? He provides no context and the previously pointed out sloppiness certain doesn't reassure me as to his competence and/or trustworthiness.

Why should I trust his good intentions? I dare say he wouldn't trust mine.

Doc,
If you look at the chart, poverty "stabilized" in about 1964.
Data came from here, unless I'm mistaken: