A long rant about Paul Krugman

If Barack Obama/Nancy Pelosi/Harry Reid and Co. were to break into Fort Knox, throw all the gold into the Atlantic,  then shoot the CEO of every Productive (i.e.  non-green) company, and then, as a follow-up, pour radioactive waste into every functioning oil well in North America, I wonder what Paul Krugman of the New York Holy Times would do to justify it.  Because he would find a way to justify it.

If the only way to hire one more government bureaucrat involved adding 3 trillion to the national debt, selling our children to China as household slaves, and worsening the condition of every low income family in the nation, I wonder what Paul Krugman would write to justify it.
Because he would find a way to justify it.

There are people in politics that I admire.  I think Ron Paul is as close as they come to being an American hero.  But he plugged in the occasional earmark here and there.  Ask him why, and he'll say that that's how the game is played.   It's what the system requires.  He shouldn't have done the earmarks.
He also should've paid more attention to his newsletters in the 80's, and not allowed any racist commentary to get in.  If you want to be president, you've gotta keep your eye on the ball.

See???  I just criticized Ron Paul.  I think it helps my objectivity a bit.

I think the world of former New Mexico governor and LP presidential candidate Gary Johnson, and would probably volunteer to be the mother of his next child.  But I totally disagree with his stance on privatizing prisons, and I don't care how much money it saved the state of New Mexico.  The government should have a monopoly on initiating force.  It's that simple.  I think Gary Johnson is wrong, wrong, wrong on this issue.

But Paul Krugman?  If Barack Obama were to start locking up people for bing left-handed, confiscating their illegally earned left-handed incomes, and sending them to Montana for "re-education", I truly believe that Paul Krugman would write a column about how this will eventually help the economy.

Jesus Christ Almighty, what a puppet.... 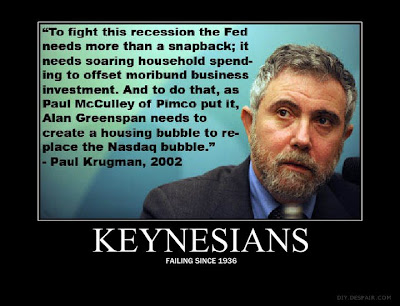 Posted by The Whited Sepulchre at 8:58 AM

I'm not familiar with the success, or lack of, in privatizing prisons but I favor it. Why are you opposed?

It's as much theoretical as anything else....
Libertarian dogma states that one of the few legit functions of government is "the initiation of force". i.e. - going to the criminal's house with guns to arrest him, holding him in a prison, etc.
Once you allow "Jails R Us" to enter the picture, you're on a very slippery slope.

we have his weekly rant in the newspaper, the man should be put in a funny farm

There are really people who have courage and doesn't afraid to express their opinions, whether that person has the highest position in the country.

IMO there is a difference between warehousing people in prison after they've been convicted and "going to the criminal's house with guns to arrest him."

I'm with my fellow Tim on this one, as long as the privatization of prisons is less expensive, inefficient, and heavy-handed than state-run prisons.