You seem concerned about an economic issue, and now that you're a senator, this is scary for all of us. 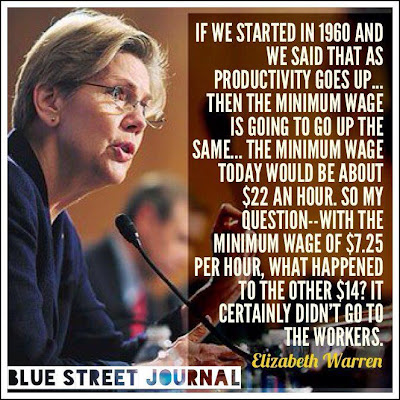 You got elected by standing up for the little guy.  Your idea of accomplishing this, as I understand it, is to throw a check and some food pellets in the little guy's mailbox every month, and also by interfering in the workplace to raise the little guy's pay to a level that is higher than his productivity. (This encourages more automation, outsourcing, unemployment, etc., but that horse has already been beaten to death elsewhere.)

Now....look at this, from The Austrian Economists site:


These increases in productivity seem to have helped "the poor".  What the hell have you risked for the poor, Elizabeth?  Anything?  Ever poured your own money into R&D for something that might not work?

But wait, that's not all!!!
Efficiency and productivity increases help the little guys more than the help the big guys!!!  Mostly because there are more of them !!

I hope this has helped.  And don't feel bad.  As long as Nancy Pelosi and Maxine Waters are alive, you won't be the biggest idiot in Congress.
But Christ Almighty, you are so close.

Posted by The Whited Sepulchre at 8:39 AM

"As long as Nancy Pelosi and Maxine Waters are alive, you won't be the biggest idiot in Congress."

5% of poor households have a photocopier? Weird.