Why I hope you'll vote for Basham, Nold and Kelleher in the May 11th Tarrant Regional Water District Board election

The Trinity River is a big, fat, hairy deal in Fort Worth TX.

A small board of Fort Worth property owners controls a significant amount of the water supply for about 10 other counties.

They're also instrumental in trying to turn the Trinity into something that we Libertarians call "Lake Granger", after Congresswoman Kay Granger, and her son J.D. Granger, a project that, if completed, will be the #1 Google Search Result for the term "Crony Capitalism".

We're supporting a slate of candidates who think the Tarrant Regional Water District should concern itself with the drinking water supply, and ensuring that the fish aren't harmful to human health.

These candidates are John Basham, Timothy Nold, and Mary Kelleher. If you're a Fort Worth resident, you have the blessed privilege of voting out a large % of the current board. You can vote for all three open spots.

Here's what your ballot oughta look like if you oppose Eminent Domain abuse, cronyism, contractor-supported election campaigns, and plans for apartment complexes built inside the flood plain. 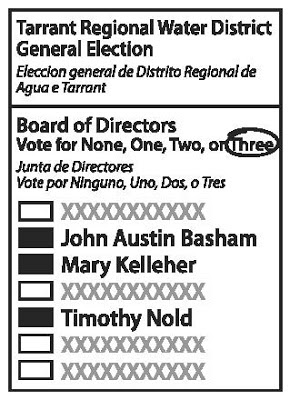 The BNK slate has been attacked from the usual suspects, of course, and that's prompted John Basham (wounded military veteran) to issue the following statement.....

Fort Worth, Texas – May 7, 2013 – Over the past few days much has been made by political elites and media insiders about campaign finance during this Tarrant Regional Water District election. TRWD challenger and part of the Basham-Nold-Kelleher (BNK) slate couldn’t agree more. “I absolutely agree campaign finance is an issue in this race,” says Basham, “I have been vigorously supported by an open government PAC and private land owners since day one.”

When asked about his opponents financial backing Mr. Basham had some serious questions. “The current board members list of donors reads like a friends and family plan,” says Basham, “When I looked at their list I couldn’t believe 95% of the donors receive our tax money in contract awards.” Mr. Basham went on to say, “It’s no wonder they want to try to paint my private donors as evil, anything to take the focus off the fact that YOU the taxpayer are funding their campaign.” A review of campaign finance reports called “8-day reports” do in fact show none of Mr. Basham’s donors receive any contracts or awards from the Tarrant Regional Water District. This cannot be said for the incumbent’s reports which show over 30 donors who are paid contractors or lobbyists for the Tarrant Regional Water District.

“It sickens me that these people get away with this every election,” says Basham, “They drag every opponent through the mud and take focus off the real issue.” Basham continued,” They are getting paybacks for the political decisions they make on the board in the form taxpayer cash laundered through contractors!”

Opponents of Mr. Basham and the BNK slate of challengers have been in quite a “tizzy” about donors from “out of town” donating to his campaign. Mr. Basham responded, “I have donors who are affected by TRWD decisions across their 11 county service area, their only say in any election is by supporting open and honest challengers,” Basham continued, “My opponents have received donations from 4 different states from as far away as Arizona and Colorado. Voters should decide which is worse; out-of-state TRWD contractors giving kick-backs or normal land owners affected by TRWD decisions.”

You have a chance to make a difference, folks.
The current board's project to convert Cowtown into Jerusalem On The Trinity should be abandoned. Now.
VOTE Bassham, Nold and Kelleher on May 11th!!!!
Posted by The Whited Sepulchre at 6:33 PM