They Hate Us For Our Freedoms? Well, no. They don't.

"They hate us for our freedoms."
Well, no, they don't.

I've been plowing through Chalmers Johnson's "Blowback" trilogy.  IMHO, this is where you should go to learn "why they hate us". 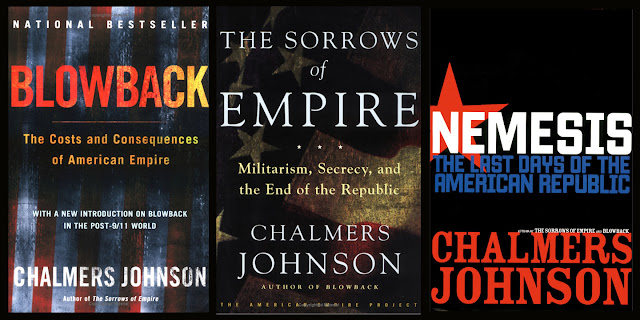 
"In Blowback, I set out to explain why we are hated around the world. The concept "Blowback" does not just mean retaliation for things our government has done to and in foreign countries. It refers to retaliation for the numerous illegal operations we have carried out abroad that were kept totally secret from the American public. This means that when the retaliation comes – as it did so spectacularly on September 11, 2001 – the American public is unable to put the events in context. So they tend to support acts intended to lash out against the perpetrators, thereby most commonly preparing the ground for yet another cycle of blowback. In the first book in this trilogy, I tried to provide some of the historical background for understanding the dilemmas we as a nation confront today, although I focused more on Asia – the area of my academic training – than on the Middle East."

And the second book, "Sorrows Of Empire":


"The Sorrows of Empire was written during the American preparations for and launching of the invasions and occupations of Afghanistan and Iraq.  I began to study our continuous military buildup since World War II and the 737 military bases we currently maintain in other people's countries. This empire of bases is the concrete manifestation of our global hegemony and many of the blowback-inducing wars we have conducted had as their true purpose the sustaining and expanding of this network. We do not think of these overseas deployments as a form of empire; in fact, most Americans do not give them any thought at all until something truly shocking, such as the treatment of prisoners at Guantanamo Bay brings them to our attention. But the people living next door to these bases and dealing with the swaggering soldiers who brawl and sometimes rape their women certainly think of them as imperial enclaves, just as the people of ancient Iberia or nineteenth-century India knew that they were victims of foreign colonization."


“In Nemesis, I have tried to present historical, political, economic, and philosophical evidence of where our current behavior is likely to lead. Specifically, I believe that to maintain our empire abroad requires resources and commitments that will inevitably undercut our domestic democracy and in the end produce a military dictatorship or its civilian equivalent. The founders of our nation understood this well and tried to create a form of government – a republic – that would prevent this from occurring. But the combination of huge standing armies, almost continuous wars, military Keynesianism, and ruinous military expenses have destroyed our republican structure in favor of an imperial presidency. We are on the cusp of losing our democracy for the sake of keeping our empire. Once a nation is started down that path, the dynamics that apply to all empires come into play – isolation, overstretch, the uniting of forces opposed to imperialism, and bankruptcy. Nemesis stalks our life as a free nation.”

Not everyone is a total geek like me.  Not everyone is willing to plow through three fairly technical and occasionally repetitive books about our disastrous foreign policy decisions, just to hold an informed opinion.

So as a public service, here's all you need to know about "Blowback", what causes it , and how we're perceived elsewhere in the world. 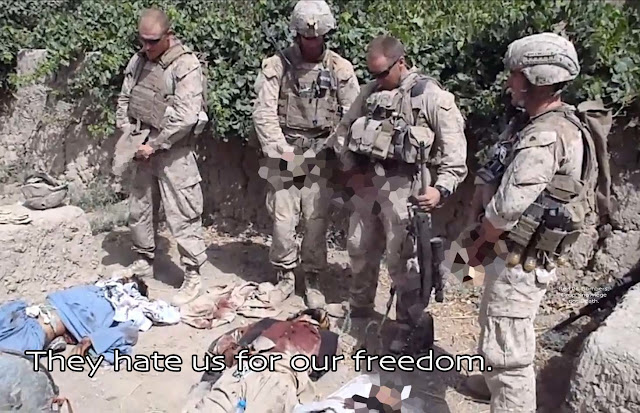 For further info, you can still check out Chalmers Johnson's "Blowback Trilogy".
Posted by The Whited Sepulchre at 5:47 PM

Posts like this is why you've lost so many readers.

''post like this'' make ME- NOT hate you for been American!unlike your government that have destroyed my life and so many more...becouse if you don't talk about it -it doesn't mean it didn't hapend.IT DID so many times and it does even today...