Eric Holthaus vows to stop flying, have no more children, all because of the weather.

I hearby nominate meteorologist Eric Holthaus for a Darwin Award.
(The Darwin Awards are given to those who remove themselves from the gene pool, sometimes via accidental death by dumbness, thereby ensuring survival of the fittest.)

Weatherman Eric Holthaus has taken a look at the U.N.'s Climate Change report and vowed to stop flying.
Actually, that's not the way our friends on the Left speak.

"I'm committing right now to stop flying."  he Tweeted.  "It's not worth the (harm to the) climate." 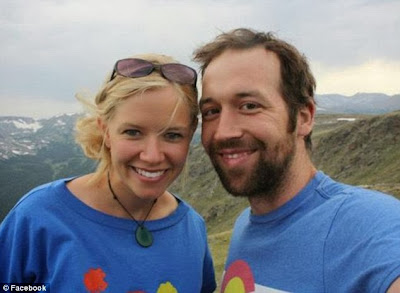 He's also going to get a vasectomy so that no more offspring of his will warm the planet.  This, of course, has prompted numerous wags to suggest that the entire liberal tribe (in the American sense of the word) go therefore and do likewise.

I did my part by going to Mr. Holthaus's Facebook page and wagering that he can't stick to his no-fly resolution for five years.  (He's a Wall Street Journal weatherman who flies to conferences and meetings and seminars and crap.  He'll no more stay grounded than Al Gore.)

As far as the vasectomy goes, that's no one's business but his.  The gene pool does have a way of policing itself, right?  Seriously.  Eric knows how accurate TOMORROW'S weather report is.  He's going to end his branch of the family tree because of something printed by the freakin' United Nations???  A Darwin Award is in order.
Posted by The Whited Sepulchre at 9:48 AM

True believers of the theory that anthropogenic global warming will destroy the planet can do their part to ward off catastrophe. They can pool their money, build huge nuclear powered rockets (propelled by superheated water instead of burning fuel), climb on board, and launch the rockets towards the stars. It's win-win-win: no CO2 release from live bodies, no CO2 use to keep warm and travel faster than walking, and no CO2 release from decomposition of their dead bodies. I expect to see thousands of such rockets given all the true believers in AGW.

At least he's eliminating the possibility of himself procreating (is that a proper English sentence?) - assuming he actually goes through with it.

Give him credit. That's more than most ideologues are willing to do.

He can do one better: fly out (even it is the last time) to a place I could mention but wouldn't an persuade local population to do a mass vasectomy.