100 Years From Now, These Will Be The Great Quotes

I've been thinking a lot about which presidential quotations will be widely known a hundred years from now.

For instance, George Washington may or may not have said the following:  "Government is not reason; it is not eloquence—it is force! Like fire, it is a dangerous servant and a fearful master; never for a moment should it be left to irresponsible action."  I have no idea if he ever made this statement.  Attributions of these lines to Washington didn't show up until around 1910.

By now, if Washington didn't say it, he should have.  It's an awesome line.  So... did he say it sometime around 1780, and only a few people jotted it down someplace?  Or did some 1910 blogger ancestor invent a fake tagline for an editorial?

Abraham Lincoln's Gettysburg Address wasn't well received at the time.  Hell, he wrote it on an envelope.  He didn't know I'd be forced to memorize it in 1978.

Who knows what lines, quotes and speeches our recent Oval Office Executives will be known for in a hundred years?

These are the entries that I believe will lead off the year 2113 edition of "Bartlett's Quotations" for each of our last 13 presidents. 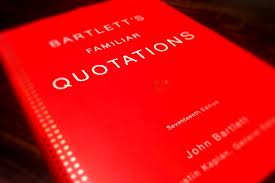 I suspect that many of these were off-the-cuff throwaway lines.

Dwight Eisenhower: "In the councils of government, we must guard against the acquisition of unwarranted influence, whether sought or unsought, by the military/industrial complex."

Gerald Ford: "Our long, national nightmare is over." He was talking about Nixon.

Jimmy Carter: "America did not invent human rights.  In a very real sense.... human rights invented America." I love that one.

Ronald Reagan: "Mr. Gorbachev, tear down this wall!" I love that one.

George H.W. Bush: "Read my lips.  No new taxes."  Although I'm tempted to submit the following:  "I do not like broccoli and I haven’t liked it since I was a little kid and my mother made me eat it. And I’m President of the United States and I’m not going to eat any more broccoli."

Bill Clinton: "I did not have sex with that woman, Miss Lewinski." I really do have some admiration for Clinton.  But as for as quotes go, he's going to be remembered for his lies.  Here's another one: "When I was in England I experimented with marijuana a time or two -- and didn't like it -- and didn't inhale and never tried inhaling again."

George W. Bush: "I hear you.  The whole world hears you."  Said after 15 guys from Saudi Arabia, two from the United Arab Emirates, one from Egypt and one dude from Lebanon flew planes into the Twin Towers, and we retaliated by attacking freakin' Afghanistan.

Barack Obama: "If you like your health insurance plan, you can keep it."

Those are my picks for the 2123 edition of Bartlett's.  May God save us all from interesting, colorful, and "transformative" presidents.
Posted by The Whited Sepulchre at 12:58 PM

I hope that 100 years from now, no one will care at presidents and scientists will like at the phenomenon like they look at religion now.

I don't think that will ever be a great quote.

If you just remove the last phrase, the quote loses its rhythm. I prefer:

"When I was in England I experimented with marijuana a time or two -- and didn't like it -- and didn't inhale and never tried inhaling again."