Thanksgiving - It didn't have to be this way

I've had one hell of a Thanksgiving with family, friends and co-workers.

It didn't have to be this way.  There is little or no difference, in terms of geography, between the USA and Venezuela.

Venezuela is now controlled by socialist idiots.  The USA, while under nominal control of a socialist idiot, has some protections in place that protect us from his worst totalitarian impulses.  We're doing ok, while Venezuela has run out of oil and coffee, despite being a major exporter of both.

In 1775, the great Thomas Paine wrote a pamphlet called "Common Sense".  In this little tract, Paine advocated complete independence from Britain.  I've probably posted the first paragraph on Facebook 50 times.  We are not the state.  The state is not society.  Enjoy.


SOME writers have so confounded society with government, as to leave little or no distinction between them; whereas they are not only different, but have different origins. Society is produced by our wants, and government by our wickedness; the former promotes our happiness POSITIVELY by uniting our affections, the latter NEGATIVELY by restraining our vices. The one encourages intercourse, the other creates distinctions. The first is a patron, the last a punisher.

I'm also a fan of the second paragraph.  Please indulge me.  I'm going somewhere with all this....


Society in every state is a blessing, but Government, even in its best state, is but a necessary evil; in its worst state an intolerable one: for when we suffer, or are exposed to the same miseries BY A GOVERNMENT, which we might expect in a country WITHOUT GOVERNMENT, our calamity is heightened by reflecting that we furnish the means by which we suffer. Government, like dress, is the badge of lost innocence; the palaces of kings are built upon the ruins of the bowers of paradise. For were the impulses of conscience clear, uniform and irresistibly obeyed, man would need no other lawgiver; but that not being the case, he finds it necessary to surrender up a part of his property to furnish means for the protection of the rest; and this he is induced to do by the same prudence which in every other case advises him, out of two evils to choose the least. Wherefore, security being the true design and end of government, it unanswerably follows that whatever form thereof appears most likely to ensure it to us, with the least expense and greatest benefit, is preferable to all others.

Yeah.  A necessary evil at best.  You get Barack/Bush/Boehner at worst.
These are the words that started the American Revolution.  Government is NOT society, and government is a necessary evil.  That's the difference between the USA and, say, Ecuador.

Please stay with me.  Words (and mission statements) are important.

Here's the preliminary throat-clearing from our Declaration Of Independence, the document where we told George III that we didn't need his help to survive and prosper.  Most of what follows was written by Thomas Jefferson, with editorial help by John Adams and Benjamin Franklin.  It would be another 100 years or so before these sentiments were applied to 1) black males and 2) women.  These guys were doing the best they could with the light they had to see by:


When in the Course of human events, it becomes necessary for one people to dissolve the political bands which have connected them with another, and to assume among the powers of the earth, the separate and equal station to which the Laws of Nature and of Nature's God entitle them, a decent respect to the opinions of mankind requires that they should declare the causes which impel them to the separation.

We hold these truths to be self-evident, that all men are created equal, that they are endowed by their Creator with certain unalienable Rights, that among these are Life, Liberty and the pursuit of Happiness.--That to secure these rights, Governments are instituted among Men, deriving their just powers from the consent of the governed, --That whenever any Form of Government becomes destructive of these ends, it is the Right of the People to alter or to abolish it, and to institute new Government, laying its foundation on such principles and organizing its powers in such form, as to them shall seem most likely to effect their Safety and Happiness.

Ok, that's all good.  We're going to set up a government with the idea that Life, Liberty (freedom) and the Pursuit of Happiness (alcohol, the ability to make lotsa money, sex, rock and roll, and ridiculing Al Gore) are important.  We're still missing something.....


We the People of the United States, in Order to form a more perfect Union, establish Justice, insure domestic Tranquility, provide for the common defense, promote the general Welfare, and secure the Blessings of Liberty to ourselves and our Posterity, do ordain and establish this Constitution for the United States of America.

But let's move on....  the main point is that our organizational by-laws state that the purpose of our government is to secure "the blessings of liberty".
End of f***ing story.

I like it.
I like it here in Texas.
Every other nation is in 2nd place.
Hell yes.

Put those two rules in place, and even though you might occasionally elect a Rooselvelt, Johnson, or Obama, you will probably prosper.
Nothing else matters for the prosperity of a nation.

I've had an awesome Thanksgiving weekend so far.
No matter where you live, I hope you have also.  (Yeah, I hope you've been able to celebrate an American holiday.)   You have a right to it. 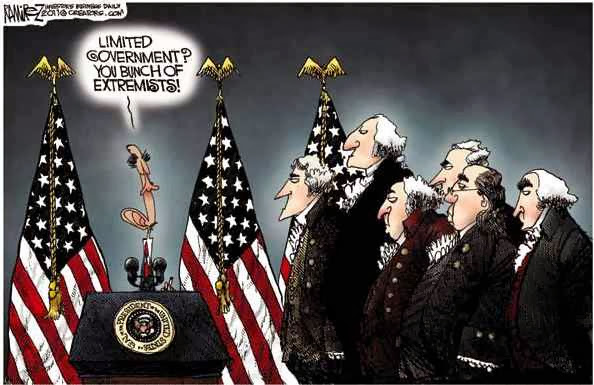 Posted by The Whited Sepulchre at 4:27 PM

"I'm not a fan of that little flourish about promoting the "general welfare"."

General welfare means just that. It does not mean enact laws that promote the welfare of select groups of people.

There are a few legitimate federal government activities that would promote the general welfare. I can think of two off-hand:
-- Inspect incoming ship cargos for rats and check debarking people for diseases.
-- Prevent the release of pollutants that can be emitted in one state and travel to others.

But, if "general Welfare" had been omitted, we'd probably have the same government. The big government supporters would have fallen back on "insure domestic Tranquility."