Who Belongs On Mount Rushmore?

David Henderson, of The Library Of Economics And Liberty, has made the unlikely claim that Warren Harding belongs on Mount Rushmore.

In addition to letting Eugene Debs out of prison, Harding also was ahead of his time on racial issues.  Here's a quote from Henderson's post:

Instead of attempting to suppress the black vote, he was a Republican, who, in 1921, made a speech in Jefferson, Ala., supporting the right of black men to vote. 1921!

He said: "Let the black man vote when he is fit to vote; prohibit the white man voting when he is unfit to vote." A reporter said that while the white section of the audience remained silent, the black section cheered.

Hardly enough to justify reshaping a mountain, but a good deed nonetheless.

Other people have made other suggestions....

There's Reagan, who as best I can tell, had the advantage of not being Jimmy Carter.... 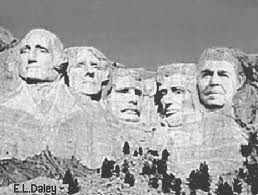 And, of course, the Obamessiah, who has had the advantage of being black.  (I hate to go down that road, but if that damn fool's name was Barry O'Brien, and he was a white guy from East Armpit, Illinois, with the same non-achievements, he would've never made it into the Illinois State Legislature.)

Don Boudreaux, of the Café Hayek site, has chimed in with his .02 cents.

I'd remove from Mt. Rushmore all people who are most famous for holding political office - which is to say, I'd blast off all four of the currently sculpted faces. I'd replace them with images of the faces of John D. Rockefeller, Sr., Gustavus Swift, J.J. Hill (even though he was Canadian!), and either Gail Borden or Steve Jobs - people who really define, and who helped in notable and noticeable ways to sculpt, what is good about America. (If obliged to include a non-entrepreneur among the four, there's no question that the person whose visage I would choose is that wisest of all Americans, H.L. Mencken.)

If the suggestion is to ban politicians from being carved into mountainsides, I'll go with the following:

Sam Walton.  Walton brought more people out of bone-grinding poverty than anyone else in history.  He deserved a Nobel.  His company has provided millions of jobs to employees that you and I and Microsoft and Starbucks and Costco consider unemployable.

Let's throw Norman Borlaug up there.  He came up with variations on wheat DNA that quadrupled yields.  He's called "the man who saved a billion lives", and because he did so without help from the Lefties, he's been widely criticized for doing so.

David Koch.  Mostly to piss off the Statists, but also because he was an early, early advocate of ending the Nixon/Obama Drug War, legalizing Gay Marriage, ending the Fed, staying out of other people's wars, and lobbying for a smaller government.  Conde Nast has called him "one of the most generous, but low-key philanthropists in the USA".  Go here for a breakdown of just some of the money this man has given away.  (He's also given lots and lots of money to defeat the Obamacrats.  Unfortunately, all of it went to Republicans.)  The Libertarians ran him for V.P. in 1980.

Milton Friedman.  He wrote Capitalism And Freedom, plus Free To Choose.  As a bonus, he and his wife Rose brought David Friedman into the world.

I like those people.  Maybe one day they'll be carved into a mountainside and properly appreciated by a grateful nation. 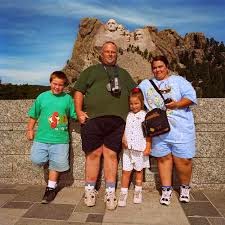 Posted by The Whited Sepulchre at 3:23 PM