You'll start seeing these soon. They got started during WWII, hauling fuel across the Australian outback. Since most of the Australian population lives within 10 miles of the beach, it doesn't make sense to restrict a rig to a sleeper cab with only one 53' trailer.

The typical Road Train setup is at least three 44' trailers. The max is six. Any rig pulling that many trailers probably has to go to a parking lot to turn around, and probably has a bigger carbon footprint than Al Gore's house. But it's cheaper than fuel and drivers for 6 rigs. Notice the heavy duty business on the nose of the tractor in this pic. It's the equivalent to the cow catcher on a locomotive. 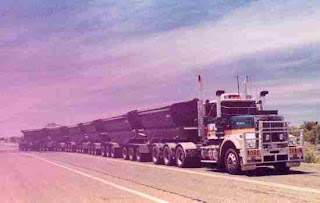 Click here to see the entire article. I've copied a few of the Australian Road Train FAK's, complete with Aussie spelling and grammar, which is instantly recognizable since it's worse than mine. These guys have 14 hour shifts, half hour stops, no speed limit at all on cars, and a major kangaroo problem....


How many Kilometres do we drive a day?
We drive about one thousand kilometres a day this takes around fourteen hours, you have to keep in mind that we do not have many little towns to go though we drive hundreds of kilometres between towns and no big highways with lots of cars. I never worked out how many kilometres we drive a year but we do a lot.
How fast do we drive? There is a speed limit for all heavy
trucks of one hundred kilometres per hour, but most drivers do about one hundred a ten kilometres per hour. As we are in the middle of no were their are not many police to stop you, plus there is no speed limit on cars at all.
How many days do we work?

Most drivers work on a two weeks driving and one
week off at home. Each day we drive about fourteen hours with short half hour stops about every five hundred kilometres.
Where do drivers sleep? Most drivers sleep in the sleeper
cabs of the truckThese days a lot of trucking companies run what we call two up, that’s were each truck has two drivers one will drive wile the other driver sleeps in the sleeper cab of the truck.
What sort of problems do we have? The worse problem we
have driving in the Outback is hitting wild animal and livestock. If you look at a photo of our truck you will see the big bull bars on the front of the trucks. We hit lots of Kangaroos which can be as tall as a man some people think they are small, but they will do a lot of damage to a car or truck. There are more kangaroos now than there was a hundred years ago, because water is pumped up from under ground to water cattle so the kangaroos have bred like wild fire. 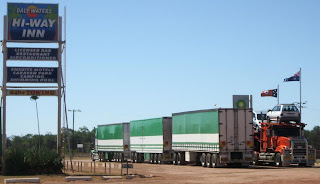 Prediction: You'll see something like this in the U.S. within 10 years. Sooner if fuel prices keep going up.

You heard it here first. Unless you read a LOT of logistics magazines.

Posted by The Whited Sepulchre at 9:49 PM

Email ThisBlogThis!Share to TwitterShare to FacebookShare to Pinterest
Labels: Australian Road Trains, Save The Planet