Interesting article here by Jay Cost, affiliated with RealClearPolitics.com on a yet-to-be delivered speech in which Mitt Romney intends to defend his Mormon faith. (It quotes an earlier column by Bob Novak.) Both Novak and Cost anticipate that the speech will be an attack on anti-Mormon bias.
The Whited Sepulchre opinion on Romney is as follows: Romney has proven that someone with red(neck) state policies can get elected in a blue(blood) state. He has money to burn. He's an ok, if slightly robotic, speaker. He saved the Utah Olympics. He's made a lot of money. Like most Mormons, he works hard.
But Romney subscribes to a belief system based on the idea that Joseph Smith f 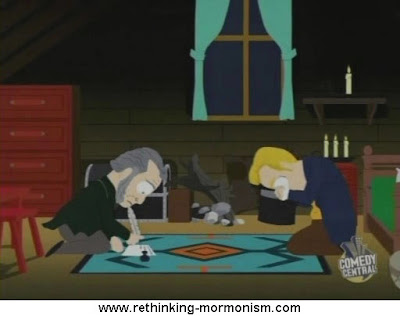 ound some gold plates buried in upstate New York, carried them to his house, put a blanket across the room so nobody else could see the plates, put on a pair of magic Ray-Bans, and with help from these supernatural sunshades was able to translate "The Book of Mormon" to a neighbor. Because the neighbor, unlike Smith, had the ability to read AND write.
According to Mormons, your ranking and status level in eternity depends on whether or not you believe this.
What is disturbing about this to many of Romney's potential Red State constituents? Well, most of them subscribe to a belief system that claims God took a liking to various Nomadic Tribesmen, all of whom lived in a small corner of what we now know as the Middle East. Not just

any regional farm-team god, but THE God chose these Tribesmen as His favorites. THE God didn't just give them some puny little gold plates, he gave his rules to them chipped in stone. God took a personal interest in all of their laws, battles, and dietary habits, and inspired these tribesmen to write a collection of stuff which was kept as an in-house proprietary document for years.
Then there were about 400 years of God-silence.
Until He inspired a lot of other writings, which, a few centuries later, got enough votes from various church committees to be known as "Bible". THE God didn't inspire anyone in East Asia, South Africa, Europe (outside of Greece and Italy), Australia, or North and South America. These huge areas of the world had their own little district deities, some of whom were confused with THE God, but they never produced anything but regional best-sellers. THE God only speaks to Middle Eastern Tribesmen. No revelations from upstate New York allowed.
Many Christians believe your body temperature in eternity hinges on whether you believe all this.
So Mitt Romney has an obvious conflict with many Red-State religious groups (which tend to be more devout than their Blue-State equivalents.) Many commentators are making comparisons to the situation faced by Kennedy because of his Catholicism. Granted, Kennedy was running as a Catholic in a predominantly Protestant nation, but most Protestants understood Catholicism. Protestantism is a Catholic splinter group. Protestants have simply rejected a few Catholic doctrines without adding too many others, except for a delightful acceptance of birth control.
A case can be made that Mormonism is a Protestant splinter group. But Joseph Smith added enough additional wood to create a new tree. And the tree is growing. Mitt Romney will be many voters' introduction to the works of Smith and his church.
Our next President will have to deal with the aftermath caused by some people from yet another belief system. They attacked us on 9/11, and if we're to believe what they say and write, they attacked because we don't subscribe to the writings in another book.
Yes, we're in an undeclared war with groups who believe in "The Koran" (A.K.A. Quran or Al-Qur'an).
"Muslims believe the Koran to be the book of divine guidance and direction for mankind and consider the text in its original Arabic to be the literal word of The God, revealed to Muhammad over a period of twenty-three years and they view the Qur'an as God's final revelation to humanity", to borrow Wikipedia's carefully crafted statement. I apologize for not downloading any pictures of the moment of Muhammad's moment of Divine Revelation, but to depict The Prophet in art or imagery is a capital offense in The Muslim Rigamarole, and I don't want to go the way of Theo Van Gogh or Salman Rushdie. To be martyred while killing infidels, according to Islamic Fundamentalists, is the fastest way to paradise.
The number of virgins you get to deflower in the next life depends on whether you believe this.
I could go further into parsing the differences between the Shia and Sunni Muslims who are having a high old time killing each other, and us, in Iraq. I'm sure the authority of God-inspired books is a contributing factor. But that would belabor an already exhausted point....
Mitt Romney is about to make a major statement deploring anti-religious bias, but bias against his book in particular.
A cynic would say that the time might be right for not less anti-religious bias, but more. Equally distributed.
"Beware The Man of One Book" - St. Thomas Aquinas
Posted by The Whited Sepulchre at 6:47 AM

Email ThisBlogThis!Share to TwitterShare to FacebookShare to Pinterest
Labels: Mitt Romney, sepulchres, Too Many Books

"They attacked us on 9/11, and if we're to believe what they say and write, they attacked because we don't subscribe to the writings in another book."

That is patently untrue. If we believe what they have written and said then they attacked us for our support of Israel and our troops in Saudi Arabia.

The best explanation I can bring to the table was written by Fareed Zakaria of Newsweek:

There are lots of reasons for the attacks on the U.S., I was referring to the stated reasons. And I think Zakaria underplays the negative effects that colonialism has had on the region and say things like "To say that Al Qaeda is a fringe group may be reassuring, but it is false." which is pretty absurd.

It isn't an easy issue, but most of the mainstream press has gotten it wrong.