From The Jihadist Safety Consultant

As many of you know, we have had a series of preventable accidents in the last few days. Both situations were due to employees failing to follow established procedure.
We have security video of the first mishap.
In this accident, a group of employees are attempting to bury an IED near a well-travelled highway.
Note that the employees are not wearing their safety glasses. The camels in the background are not properly equipped with seat belts, nor are there any chocks nearby to keep the camels from sliding forward. And is anyone in this video wearing his back brace? I don't think so.
All of these regulations were covered during orientation, and the training records are part of each employee's personnel file.

Accidents like this one are the primary cause of skyrocketing insurance premiums. And turbans. (That's what passes for humor in the Safety Consultant field.)
If any employees believe that Allah will reward these accident victims with 72 virgins, they are mistaken.
Touching the red wire to the red wire is not martyrdom, but suicide.
Folks, it's not martyrdom unless you take an Infidel with you.

Please reset your "This Shop Has Worked ____ Days Without A Lost Time Accident" calendars back to zero.

The next accident was clearly caused by using the wrong tool for the job.
No matter how many photographers are nearby, no matter how patiently you've waited for CNN to get the lighting right, you should always wear your protective heat shields when burning an American flag. And policy 35-3-C-057-(b) specifically states that American flags should not be lit by using table matches, cigarette lighters, or any other improvised ignition systems.
The policy clearly states that only blowtorches are to be used.

People, the point of the exercise is to burn the flag, not to look good doing it. Get the job done, and move on to the next project.

Many of our employees apparently believe that the point of flag burning is to be seen and admired by co-workers. In the photo below, try to calculate the number of man-hours lost to this one operation: 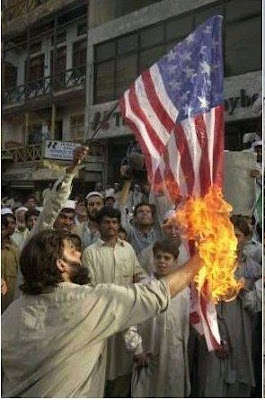 Then ask yourself, where are everyone's I.D. badges? Where is Mahmoud's safety helmet? And who said it was ok to have that kid in the workplace? 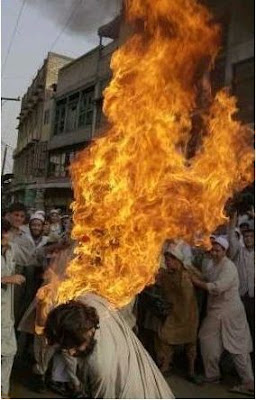 In this picture, taken a few seconds later, the flames have spread to Mahmoud's shoulder. This led to yet another disappointment. None of the factory inspections were up-to-date; therefore the only fire extinguisher was in the nearest village, eight miles away. My subsequent investigation revealed that it was last serviced and recharged in 1987.

In the final photograph, the flames are engulfing Mahmoud's face. 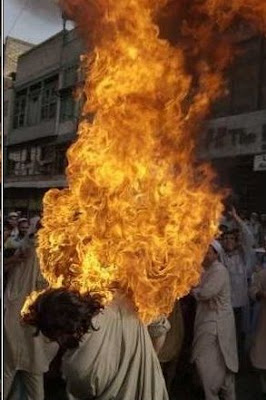 His co-workers eventually put out the fire with a combination of dirt, sand, camel manure, and blankets. When I visited the hospital to complete the Accident Reports (which, BTW, were turned in before noon the next day), he was resting comfortably.

Please allow me to be blunt here. Mahmoud has been horribly disfigured, and unless he can figure out a way to die while killing infidels, he's had his last virgin. The man needs to wear a burkha.

But how will we ever succesfully kill ourselves if we keep having all of these preventable accidents?

Jihadist Safety Consultant
Posted by The Whited Sepulchre at 10:28 PM

Dr. Liz,
I've giggled some over it myself. Thanks for acknowledging the giggles.

Cool. Thanks for brightening my day.

I haven't done any research, but I wonder if they aren't trying to dig up a bomb rather than bury it. Seems like they yanking pretty hard for burying something... anyhoo.
Ooops!

John,
You're correct. Those were the good guys, but the context worked for me.

This was a send-up of our in-house safety consultant at work.

From now on, anytime terrorists destroy themselves but no one else, you'll hear a report from Rickle Abu-Noir