The Democrats and Republicans forgot to file to be on the ballot !

This could get interesting.
The Mommy Party (D) and The Daddy Party (R) both failed to do their filings on time with the elections commission in Texas.
Therefore, their presidential candidates have no right to be on the Texas ballot in November.
Libertarian presidential candidate Bob Barr has filed a lawsuit to hold the Bipartisans to the strict letter of the law. For decades, in the name of preserving power for themselves, the Democrats and Republicans have held all 2nd Parties to an incredibly strict ballot access standard. Turnabout is fair play, don't you think?

I remember High School Civics class discussions about the difference between democracies and totalitarian governments. We were taught that Cuba, China, and The Soviet Union had elections, but that only members of the ruling party had access to the ballot, a situation that made a farce out of the elections.

Can anyone see any real difference between those scenarios and the current situation with Republicans and Democrats locking up access to debates and ballots? Heck, it's probably easier for a renegade to get on the ballot in China than it is in the U.S. 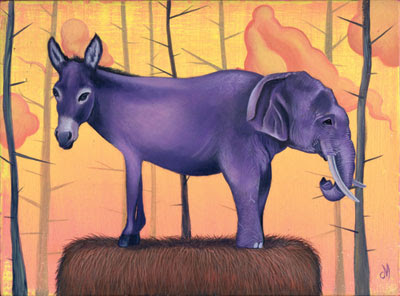 Check out this link to the discussion on Samizdata. I hope you'll pay particular attention to the comments. Many U.S. voters - Obama supporters - are hoping that Barr is successful, since McCain is otherwise likely to win in Texas.

Do you have any idea why the Democrats won't go along with Barr and his lawsuit? Not now, not ever, not in a million years, even if it means Texas goes Republican?

It's because they're the other half of the Republicans. It's like a tag team wrestling match. The Mommy Party (D) gets to be in the ring until their shtick grows tiresome. Then they're sent to the corner and the Daddy Party (R) goes in for a while.

They don't want anyone from the crowd jumping into the arena. God knows what goodies and freebies could be taken away from them if that were to happen.

Think about it. This is a golden opportunity for the Democrats to neutralize 34 Republican electoral votes from Texas! The law is on their side! The law is on Bob Barr's side. 34 ELECTORAL VOTES ! ! !

The Democrats will never support him in this lawsuit. Yin will attack Yang, and Heads will attack Tails before anything like that happens.

The Democrats and Republicans, especially after the stunts they've pulled during this shameful week, can no longer be considered opponents. They are partners.

Donkelephant pic from The Indiana University Alumni Association, of all places....
Posted by The Whited Sepulchre at 12:11 PM

To all of the Whited's fans and fellow bloggers:

After knocking down a couple of cosmopolitans with Mr. Whited, I have learned a couple of interesting things about the Sepulchre. One, he has a very eclectic taste in music. From K.C. and the Sunshine band to Big and Rich. In fact, he insisted that I play Save a Horse Ride a Cowboy 4 times. I wonder if he has these songs on his MP3 player.

Eclectic music, eclectic politics. It all pans out.
There is a hotel bar I frequent on Friday nights down at the corner of Beach and I-30 in Fort Worth. They have eclectic karaoke, but their drink selection is like American politics. They only have Coors Light on tap.
Cosmopolitans? What were you thinking? *sigh*

Gar,
Do not believe a word that comes out of that vile woman's mouth.

Also, I've managed to get this post onto the front page of Reddit. And what do hundreds and hundreds of people get to see and read about?

He did beg for some New Kids on the Block, but my highly evolved musical taste just could not stomach it. Plus it was not on the Juke box. Cant find anything on Reddit.

Well, to be honest, or less dishonest. I was thinking of something more appropriate to comment about, but when I clicked the comment button and read the fembuttx comment, the original comment I had went the way of all good things.
I blogged about it instead. They'll have to read my blog. Only intelligent need apply so I won't link it here.
I don't know what Reddit is. I went there and couldn't find this post. Maybe they are in bed with the Republicans?
I noticed several posts with lots of comments. Are those actual post comments or Reddit comments?
Bo & Jim mentioned Bob Barr and his lawsuit on the radio this morning so I guess it's getting media attention. They were not supportive though. I hate the media and I've never had a cosmopolitan at a bar. Come to think of it, I've never had a cosmopolitan. What is a cosmopolitan.